Stories come in their own time, not yours

Don't you just hate it when you wake in the middle of the night with a story idea -- And you hafta get up and write it down?

One struck again last Friday morning. At 4:56, to be exact. By the time my husband woke up, at his normal time of 6:30, I was deep into getting it all down into a computer file. Naturally, it wasn't one of my Friday's off -- I had to go to work. Fridays we are short-staffed in the library. Since there are only two of us, I was on the desk all day.

I haven't posted all week because I've been too worried about my daughter out in San Diego. I kept logging onto CNN, watching the fires out there get closer and closer to her home. When the Santa Ana Winds finally died down and she was finally allowed to return to her home, she sent e-mails describing her family's evacuation adventures. We had worried about her asthma. The smoke really affected her lungs. But she was lucky in two ways:
1) Since she is a pharmacist, she had a good supply of medical masks. and
2) She was able to stay with friends at their beach house where the air was cleaner.

She went back to work (11 hour shifts, serving people escaping from the fires), while her husband and dog helped the ASPCA rescue horses and other animals from the fire area and take them to the Del Mar fairgrounds. He also helped out at the stadium where he and Lance (the golden retriever) met Governor Schwartzenager. (He swears he has pictures to prove it! )

Soooo, what was my story about -- that had to get written down early Friday morning?
You've probably guessed -- A California Fire story.
-wendieO
Posted by Wendie O at 11:05 PM 1 comment:

Today, the Maryland Association of School Librarians held their annual convention in Ocean City, Maryland. Although I had attended the Maryland Author Luncheon and had signed books at this convention many times, this was the first time I was invited to be a speaker.

The seven-year old (almost eight year old, can you believe it?) and her best friend helped me stay awake for the drive to OC Thursday evening after work. Since we didn't get settled down into our hotel room until late, I assumed the kids would sleep in. Nope. I woke up at 7:30 am and they were out of bed by the time I finished my shower.

We then hit the beach. It was warm -- mid-70s, but cloudy/ overcast. Evidently it had poured while the girls were in the room, but not a drop of rain fell while we were outside. The girls raced waves (getting caught several times because the tide was coming in) and dug holes. Best friend's mom had offered huge plastic shovels. Boy were they great!

But, it started getting foggier, so we went back into the hotel. Now they're having fun in the hotel pool and I"m surfing the internet poolside. (I feel absolutely decadent.)
Posted by Wendie O at 5:34 PM 2 comments:

Yesterday Paige and I (That's us in the picture to the right) signed HALLOWEEN DAY BOOK OF FACTS AND FUN at the NAIBA. (New Atlantic Independent Booksellers Association)
The bookseller group met in Baltimore this year -- very convenient. And they invited local authors to join the nationally famous authors -- the ones whose publishers paid for them to attend -- as guests. Paige and I were scheduled to display our books at the Children's book author luncheon. (a box lunch) and then to sign books afterwards.

Since the event was being held downtown at the Sheraton Hotel, I didn't even look at the address of the hotel. After all, I knew right where the Sheraton was. Down by the Inner Harbour tourist area -- near the football and baseball parks. Luckily I planned to be there early, because I was wrong, wrong, wrong.

It turned out that the convention was being held at the hotel next to the old Civic Center. (now called First Marina Center) Sheraton Hotels had bought out the old hotel owners. Luckily I knew that old hotel well, because I had attended many Science Fiction conventions there. It was no problem to zip up the hill from the harbor area. And I still arrived on time for the "luncheon."

Met many nice bookstore owners and was amazed at how many of them already knew our books and were looking forward to the new one. (I still say that it's difficult to look professional and attractive while you are eating -- which is why I wasn't able to eat very much of the sandwich, but did manage to scarf down the fruit cup in between talking to booksellers.)

Afterwards we browsed the exhibit area while waiting for our turn to sign books.

I checked out the group signing before us.
Hmmm. James Gurney is signing his new Dinotopia book and an artist demonstrating block printing. I knew Paige would be interested in that, so I dragged her away from the exhibits. She had no idea that all these books were being given out free. (and the artist was giving out signed copies of her block printing.) So she quickly got in line to get a Dinotopia for her son and a print for herself.

When it came to our turn to sign, we didn't expect anybody much. But there was a line of people wanting copies of our book. (It's a two-fer. Both writer and illustrator are signing!) We were busy the whole time we were scheduled to be there and signed most of the books that the publisher sent.

The thrill of MY day was meeting Debbie Dadey in person and talking about writing while working a day job and being able to retire to write -- my dream and her reality.

-wendieO
Posted by Wendie O at 8:01 AM No comments:

This week is the Albuquerque International Balloon Fiesta.

My brother is part of a balloon crew and he keeps inviting us to come visit him during the festival. But so far we haven't made it. I think his balloon is a regular balloon shape, but I thought this bee balloon looked cute.

I keep telling him that I'd come if he could get a school to invite me to do an author visit and pay my way. However, I hear that schools there think that authors should do programs for free. There are enough self-published authors in the area who are willing to do this that they think this is the norm. It's not.
Posted by Wendie O at 10:06 PM No comments: 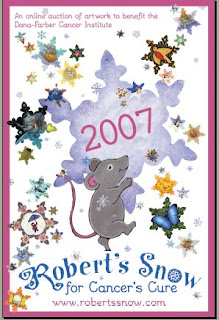 Want to own some original art? The snowflakes that many talented children’s book illustrators have created for Robert’s Snow 2007 are now available for viewing online at the Robert’s Snow website. You can view them by clicking here.

For various family reasons -- mainly events the seven year old wanted to attend, like gymnastics class and the Greek Festival (Greek pastries and lamb -- yumm!), we missed most of the Baltimore Book Festival. I simply drove down on Sunday afternoon for my presentation.

The Children's Bookstore Tent was packed. The crowd laughed and had a great time.
And then the speaker (Kevin O'Malley) stopped talking and moved to a table at the side to sign books. And the whole crowd got up and lined up there.

When I came to the front of the tent to speak -- the seats were empty.
"Just begin talking," the bookstore owner ordered -- so I did.
I ended up with eight people -- four kids and four adults. But still, we had a great conversation about non-fiction, about book publishing, and about illustrators and illustrations.

I quized them about Halloween and other stuff, giving out Halloween Book of Facts and Fun pencils as rewards for correct answers. (and ended up giving pencils to all of them for being such a good audience.)

I signed a few books for people, and then I signed stock for the Children's Bookstore. They said that TO FLY had sold 20 copies before I came to talk. And that they'll be bringing my Halloween book to various book fairs during October. nice.

Went home to enjoy more Greek pastries. There's nothing like a sugar buzz from too much honey.

-wendieO
(waving "hi" to my sister, who finally found my blog)
Posted by Wendie O at 2:33 PM 2 comments:

I was going to insert a link here
such as one to AOL http://www.aol.com/

Okay, it made a link, but it's not a tiny URL.
hmm I guess I'd better read the Blogger Instruction book to get that, I suppose.

I want to learn how to write the word "here" (or something) and have that word be a link -- like the major Bloggers do.

p.s. I found a spellcheck button.
Is that new? or has it been there all the time and I didn't see it?

Labels: not a small link

Night of the Howling Dog

Graham Salisbury's newest adventure story is even more exciting because it is based on an event that really happened.

Book Summary: DYLAN'S SCOUT TROOP goes camping in Halape, a remote spot below the volcano on the Big Island of Hawaii. The only thing wrong with the weekend on a beautiful, peaceful beach is Louie, a tough older boy. Louie and Dylan just can't get along.

That night an earthquake rocks the camp, and then a wave rushes in, sweeping everyone and everything before it. Dylan and Louie must team up on a dangerous rescue mission. The next hours are an amazing story of survival and the true meaning of leadership.

This might be the one that gets him noticed by the Newbery Committee.

I picked this up off the New Books shelf because --
1) I had met him at SCBWI-LA several years ago and had attended his talk about writing.
2) When I read the blurb, I discovered it involved a volcano in Hawaii -- and I'm a volcano fan from way back.
3) It's a boy scout troop adventure story.


Wahooo!
We have a copy of the book cover in this post!
First time this worked for me.
hmmm, I think I'll go back and see if I can put a bookcover in the Middle School is Worse than Meatloaf post.
crossing fingers and toes.

Double Wahoo -- That one worked, too.
Fan-Tas-Tic!