The year is winding down

Well, The Day of Many Presents is over.

And we ate delicious food.
And we gathered with friends and relatives.  (I had two gatherings. How many did you attend?)
And we were afraid to look at the scale to see how much we had gained.  (We'll wait to do that sometime in January.)
Some of us had rain, some had snow (and travel delays), and some had unexpectedly warm weather. (enjoy that while it lasts because Winter Is Coming.)
But, the best thing is -- the days are getting longer.  Someday soon we'll have daylight after 5:00 in the evening!
Posted by WendieO at 2:14 PM No comments:

Besides Echo by Pam Munoz Ryan , I now have more books that I want to receive the Newbery. 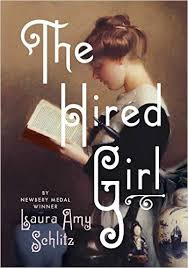 One is The Hired Girl by Laura Amy Schlitz. Somerville, MA: Candlewick, 2015.
Ya - I know she already won a Newbery. But there's no law against winning another (or honor book). Supurbly done, well researched story of a girl who runs away from a cruel father on a farm and goest to the big city of Baltimore.  (Having lived in Baltimore for years, I can verify the accuracy of it. But Schlitz works at a school in Baltimore, so of course she'd get it right. And having not only lived in a 17th century house with items from all centuries in it plus having worked with a wood stove that heated my house, I can also verify what was in the Baltimore house in Schlitz's book and how to clean them.)
As a hired girl and a Catholic, Joan finds herself working as the Shabbos Goy (the person who does the work around a Jewish household on Saturday - the Jewish holy day when they are not allowed to work.  Told in Diary format
Another review is from School Library Journal's Elizabeth Bird here. 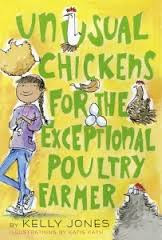 The other book that I love, love, love probably won't get the Newbery - because it's funny and for some reason funny books don't seem to win this award. But I loved, loved, loved Unusual Chickens for the Exceptional Poultry Farmer by Kelly Jones. New York: Alfred A. Knopf, 2015.
Illustrated with cartoony figures this is the tale, told in letter format, about Sophie, a girl whose family has inherited a farm and who discovers she had become the caretaker of very unusual chickens.
Invisible chickens
a chicken who can unlock the chicken coop
a chameleon chicken
a really fast chicken that Sophie calls - the roadrunner
and more.
Additional review of this book is on the Educating Alice blog (by Monica Edinger).

In additon, I'm currently reading the latest by Kimberly Brubacker Bradley - The War that Saved My Life.  I have always felt most all of her books have deserved the Newbery, so why not this year.
A world War II tale about a girl with a club foot who is evacuated to the English countryside after being held prisoner by her mother for about 9 years and how she discovers the world.
Grass!
People that take care of you and don't beat you and starve you.
a Pony! 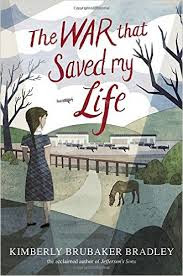 Elizabeth Bird in her School Library Journal review says:
"This isn’t merely a story where the main character has to learn and grow and change. She has this enormous task of making Ava strong in every possible way after a lifetime of systematic, often horrific, abuse. And she has to do so realistically. No deus ex machina. No sudden conversion out of the blue. That she pulls it off is astounding. Honestly it made me want to reread the book several times over, if only to figure out how she managed to display Ada’s anger and shock in the face of kindness with such aplomb. For me, it was the little lines that conveyed it best. Sentences like the one Ada says after the first birthday she has ever celebrated: “I had so much. I felt so sad.” It’s not a flashy thing to say. Just true."
Actually she says much more than this. Go read her review

Posted by WendieO at 9:21 PM No comments:

My last attempt to play Bridge

I love to play Bridge. But I just play it for fun.
Do you play Bridge?
Other people are more serious about it. Much more serious. (My best friend in 7th grade Annette Rapleyea's father was one - he played professionally, whatever that means.)That ordinary people would be deeply serious about the game of Bridge hit home with me one year when we went down to the Ocean (actually the Delaware Bay) with the MG "T" Series club for a weekend. A group of the ladies needed a fourth, so I joined them - just for fun.
Well!
I soon learned that these ladies were cutthroat about Bridge - and they were very upset about my casual attitude. Verbally so. Several of them didn't talk to me again during that weekend - and the looks they gave me would have replaced the air conditioner in the beach house.
Brrrrrrrr.
Posted by WendieO at 12:17 PM No comments:

December 17 is the day the Wright brothers flew their first working airplane. 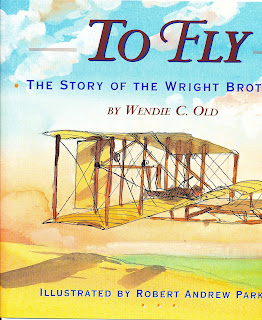 There's an article in the New York Times that indicates that Doctors are beginning to emphasize Reading to Children as better than all the electronics parents give children these days.

Now, this is something that librarians have known for over a century and something that the Headstart program also emphasized.
In fact, There's a library that has a sign over the doorway to their Children's Room that say something to the effect that "The Best App for a Child is an Book and Your Lap."
(If I find that picture, I'll try to post it here.  It shows up periodically on Facebook.)

Some parts of the article say:
With the increased recognition that an important part of brain development occurs within the first three years of a child’s life, and that reading to children enhances vocabulary and other important communication skills, the American Academy of Pediatrics  which represents 62,000 pediatricians across the country, is asking its members to become powerful advocates for reading aloud, every time a baby visits the doctor.

The pediatricians’ group hopes that by encouraging parents to read often and early, they may help reduce academic disparities between wealthier and low-income children as well as between racial groups. “If we can get that first 1,000 days of life right,” said Dr. Dipesh Navsaria, an assistant professor of pediatrics at the University of Wisconsin School of Medicine and Public Health, “we’re really going to save a lot of trouble later on and have to do far less remediation.”

Follow the above link to get the whole article.
Posted by WendieO at 8:15 PM No comments: