For Teens who Write

Every so often I'm asked -- where can a teen who loves to write post their stories and poems? (which is a different question from "where can a teen writer get published -- in a magazine or book?")

The Kidlithosphere has gathered a list of these online sites which are safe places for writing teens to show off their work:
(I'll add more links as I find them.)

Writer and speaker, Anastasia Suen, has a page on her website with millions of links for students.

Write On, a blog for Teen Writers and Readers. (It looks like a WordPress webpage and offers to give critiques)

Author, Dee Scribe, has a section on her website all about being a writer.

The Hay Fever blog has writing tips for teens. It took me a while to figure out what this is, but it seems to be a part of something called The Hay Festival over in the United Kingdom.

FIGMENT seems to be a place to upload your writing to share.

TeachingAuthors blog also has a page of links to sites for young writers.


-wendieO
"In the nonstop tsunami of global information, librarians provide us with floaties and teach us to swim." --Linton Weeks, Washington Post
Posted by Wendie O at 7:29 AM 2 comments:

Saturday, I held one of my favorite library programs -- Peanut Butter Science. It's so much fun, for me and the kids. (parents attending loved it too.)

I had a bag of raw peanuts and a large bag of roasted peanuts. (supposedly salted, but you certainly couldn't tell.) First we examined the raw peanuts and found the tiny plant. Then we had a race, shelling raw and cooked peanuts. (cooked won -- soooo much easier.)

After they all madly shelled lots of roasted peanuts, I made peanut butter in the blender while we held a taste test of several commercial brands vs. so-called "natural" peanutbutter. Peter Pan Peanut Butter won, because it tasted as if the makers had added sugar to it.

Then we tasted the fresh peanut butter, and most everyone loved that best.
(needed salt, though.)

Everyone went home with raw peanuts to plant, jars of peanut butter, and peanut shell mulch.
YUMMY! (well, maybe the mulch wasn't yummy, but the rest was.
-wo
Posted by Wendie O at 5:46 PM No comments:

(Actually the title of this piece, sent to me a long time ago by another library worker, is Dr. Seuss Explains. But my flanging fingers typed 'complains,' instead. weird.

I'm sorry that I don't know who the true author is, but since Dr. Seuss's birthday is coming up soon, I thought I'd post it now. (We need to replace the words "floppy disk" with any current means of storing computer files in order to update it.) 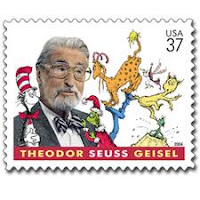 If a packet hits a pocket on a socket on a port, and the bus is interrupted at a very last resort, and the access of the memory makes your floppy disk abort, then the socket packet pocket has an error to report.

If your cursor finds a menu item followed by a dash, and the double-clicking icon puts your window in the trash, and your data is corrupted 'cause the index doesn't hash, then your situation's hopeless and your system's gon'na crash!

If the label on the cable on the table at your house says the network is connected to the button on your mouse, but your packets want to tunnel to another protocol, that's repeatedly rejected by the printer down the hall, and your screen is all distorted by the side effects of gauss, so your icons in the window are as wavy as a souse; then you may as well reboot and go out with a bang, 'cuz sure as I'm a poet, that baby's gonna hang!

When the copy of your floppy's getting sloppy in the disk, and the macro code instructions cause unnecessary risk, then you'll have to flash the memory and you'll want to RAM your ROM then quickly turn off the computer and be sure to tell your Mom!

Labels: computers are run by magic or something, Dr. Seuss, this could only happen to an old PC not to my MAC

My first packet for Vermont College is done and has been sent. (About 50 pages of writing.)
Now, I wait for the advisor to look it over and send it back with her comments.

While I'm waiting, I'm reading John Gardner's The Art of Fiction, getting ready for the assignment due Monday -- show the same setting as different characters (who are in different moods) would see it. It'll be interesting to see what the other members of our group come up with.

I plan to use the place in Michigan where my family took a month's vacation one year.
Now that I think about it, it's strange that I've never placed a story there. I have such memories of canoeing on the lake and of the food I learned to prepare. Noodles, for example. I didn't know that noodles were made. I thought you bought them in a box from the grocery store.

I'm also coming up with ideas for new creative work -- and have a shorter piece already done.
But I probably won't work on any critical essays until I get this first packet back. Until I find out if I'm writing them correctly -- or not.

Meanwhile -- I'm doing the Peanut Butter Science program at the library tomorrow.
-wo
Posted by Wendie O at 9:19 PM 3 comments:

This coming week is Random Acts of Kindness Week.
(RAK)
Surprise people.
Do nice things. (and don't let them know who did it.)
Here and there.
Randomly.

(Do children who take too long in the shower count? I'm about ready to turn off the hot water at the source and freeze her out of there.)
Never mind.
RAK hasn't begun, yet. Begins tomorrow.
(tip-toes downstairs to stare at the master hot water faucet handle.)
(should I, or shouldn't I?)
Posted by Wendie O at 10:35 PM No comments:

New addition to our family

I'm not talking about our new grandson. He's in California. Mother and child are doing fine. And his father is doing the 'delirious father' thing with photographs. But being a modern father, he has created a whole Flicker account full of photos and Videos (!) of this now 5 day old child.
(I have the one picture that I treasure -- one of my oldest daughter with her newborn baby. That's the only picture I need.)

I'm talking about a different addition to our family.
We have been adopted by a wandering male cat. (I TOLD my husband not to put food out, but he's an old softie.) We simply don't need to have three cats. We don't. Okay, he was skin and bones when we first saw him, but still....

One cat would have been fine.
But she's getting old, so last year we got a kitten. (or was it 2 years ago? How time flies when you're too busy to think.)
Two cats in a household is quite enough, thank you. We don't need to be like the family next door with their 20 or more cats. (We've lost count and have no idea how many cats they now have.)

This cat, this male grey tabby cat, seems to have been an abandoned cat, probably from the nearby apartments. People come and go all the time from there. How do we know he used to be owned by people? It just happens that my husband has let this cat come into the house, while I'm at work. He helps himself to our cat's food (much growling from our cats, but that doesn't stop him), uses the kitty litter box (hey -- he has the whole outdoors and he comes in to use OUR litter?), and then settles himself down in MY chair, purring madly. Obviously a cat who was used to living with people and loved it when allowed to come visit us.

The 11-year-old calls him, "Grey-Stripe," a name from her favorite Warriors book series by Erin Hunter.

Okay, I admit he's charming, except when he sprays IN the house. (I did say he was a MALE cat, didn't I? an unfixed male.)
So far he just visits.
But if he intends to stay, we're taking him to the Vet.
-wendieO
Posted by Wendie O at 9:52 AM 3 comments: 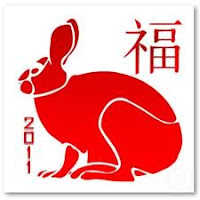 Happy New Year -- Chinese New Year, that is.
This is now the year of the Rabbit.

My daughter's baby boy was due today, but he was in a hurry and was born last Monday -- which means he was born in the Year of the Tiger!
Posted by Wendie O at 4:42 PM No comments: 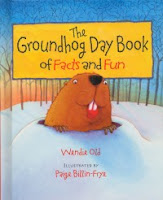 If you can answer that one (in the comments), I'll send you a copy of the Groundhog Day book.
-wendieOld
Posted by Wendie O at 10:31 AM 4 comments: