Titanic!
Are we ever going to get tired of reading books about the sinking of the Titanic? Probably not. 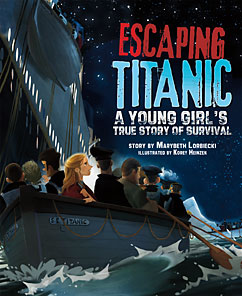 Among the latest offerings from Capstone Press is a picture book biography of a young girl, Ruth Elizabeth Becker, who survived the disaster: Escaping Titanic, a Young Girl’s True Story of Survival by Marybeth Lorbiecki.  (Naturally, it’s illustrated by an artist, since any photographs taken on the ship itself were lost when it went down.)

Along with the usual Capstone directions to go to Facthound.com for more information, a timeline is included as well as an Afterword which continues Ruth's biography up until her ashes are scattered over the sunken Titanic.

For more links to Nonfiction Monday book reviews, check out the Nonfiction Roundup collection at the Gathering Books  blog.  Enjoy.

Hey, Here's the Top 10 Girl Power books!  (picture books and a few early chapter books) from the Nerdy Book Club.
Posted by WendieO at 9:05 AM No comments:

Author and illustrator, Peter Sis, was the honored guest at the Children's Book Guild of Washington, D.C.'s Nonfiction Award ceremony yesterday. (Saturday, April 21) where he was given an award for the body of his work.  Click on the links for more information about him and about this award.

(This just in:  Peter Sís is also the new winner of the 2012 Hans Christian Andersen Award!)

Peter Sís was born in Czechoslovakia and began his career as a filmmaker. Sent to Los Angeles to produce a film for the 1984 Winter Olympics, he was then ordered to come home by the Czech government when the Soviet Union and Eastern bloc countries boycotted the Olympics. Sís chose to stay in the United States and was granted asylum. He began a correspondence with Maurice Sendak and ultimately began a new career illustrating and writing children’s books.

My job at this event was to oversee the tables displaying some of the books the Children's Book Guild Members have had published, with the wonderful help of two other Book Guild Members -- Rebecca Jones and Liane Rosenbatt., which meant that we got to talk to the audience about the many terrific books on display while they were in line to get their copies of Peter Sis's books signed.

Peter, being an illustrator, took a long time to sign because he also drew little sketches to match whatever that particular book was about.  (We authors simply sign our names and sometimes include a short message.  But I like the idea of adding an illustration, so whenever I can find a stamp that goes along with a book, I use that.  -A cute foot for Busy Toes.  -A stamp of a child's hand for Busy Fingers.)

The food at the award luncheon was delicious, as usual.  The Pier One restaurant at the Chanel Inn always serves the best food! I went back to get another slice of the bread pudding, but every slice of it was GONE!

Peter began his speech by talking about his newest book, The conference of Birds, which is based on a Sufi poem. It turns out that he's also well known for having his art plastered on New York Subway trains and now a mural from this book will be put all over the ceiling of one.  (For Baltimore fans, he also did the mural that was in the children's play area at Baltimore Washington Thurgood Marshall International Airport, which since has been moved elsewhere in the building when they renovated.)

The remainder of his talk became a visual biography of him and his work. Although he mentioned that his children had TOLD him not go make jokes --Please Dad, no jokes --  he had us laughing often at his comments. Around the room I could see several Middle and High Schoolers, which made me regret the fact that I hadn't brought my own middleschooler who loves art and well-illustrated books.  (But since I was running the Member's Books Table, I wasn't sure she would enjoy being at the event for that many hours.)

All in all it was a wonderful day with a wonderful speaker and I made it back home to north of Baltimore long before the rains hit. (Hurrah!)    -wo
Posted by WendieO at 8:31 AM No comments:

Sue Bradford Edwards has written a marvelous article on the WOW (Women on Writing) blog about building bridges to draw your reader into your story.
Details.
It's all in the details.
Posted by WendieO at 7:58 PM 1 comment:

Labels: a blog about the craft of writing, Sue Bradford Edwards, WOW, writing

Hints from the Tooth Fairy 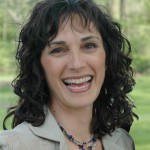 Katie Davis, writer/ illustrator and author of many picture books and a few novels, has cobbled together a little list of hints for parents (A.K.A. Tooth Fairy Assistants) about how to handle Tooth Fairy questions from their children, in this article in the Huff Post Parents called:  Tips from the Tooth Fairy by Mabel the Tooth Fairy as told to Katie Davis.

That's funny -- the name of one of her picture books is -- Mabel the Tooth Fairy and How She Got Her Job.  (I guess this is why this column looks as if it was written by Mabel.)

Katie is a fun person to know and is very entertaining during her presentations at schools. Check out her website.  She not only is a local TV personality in New York but she also produces Podcasts you can download.  Enjoy!
Posted by WendieO at 8:54 AM No comments:

Skateboarders and Friday the 13th

We were driving down a curvy hill yesterday -- four lanes wide -- five actually with the turn lane in the middle, when what did we see but a skateboarder (male, natch) moving down the hill in the center turn lane -- TEXTING on his phone.

All I could think was -- "watch out buddy. There's a curve up ahead and a mass of moving traffic coming up the hill at you." Unfortunately, the curves in the road took us out of sight of what I imagined might have happened behind us.

Labels: Friday the 13th, skateboarder, texting while moving is illegal in Maryland

In case you  haven't been visiting Katie Davis' blog this month, she's featuring a poet a day. Today's poet, Jane Yolen, uses several poetic forms to tell you how to write those kinds of poems.
Fun, Fun.
Enjoy
Posted by WendieO at 7:11 AM No comments:

For part of this past week we had two grandkids with us. Fun. Fun. We didn't take as many trips together as I had planned, just one to Havre de Grace, Maryland, to walk the Promenade along the Chesapeake Bay and buy chocolates at Bomboy's.


The grandkids colored three dozen eggs a few days ago. Thank heavens one of them took some of the eggs home with her. We never could have eaten that many ourselves. Now we're looking forward to deviled eggs and egg salad after the egg hunt.


On the Writing front, I'm busily transferring my cat story to Scrivener software and experimenting with how to use it.  If Lisa Yee (and other writers) recommends it, it must be good, right? So far I'd say there's a steep learning curve.


I'm also trying to figure out how to use those tiny cards on the Scrivener bulletin board as note taking cards for a nonfiction project (as suggested by another writer), but so far -- not so good.  I may have to go back to the old-fashioned way -- using pen and 4x6 paper note cards.


Problem 1 -- figuring out how to balance the open book beside my computer in the small space I have to work in order to refer to it to take notes. (Where the heck did I put that handy-dandy book weight which nicely keeps books open while you read and refer to them?)


Problem 2 -- there doesn't seem to be any way to reproduce those notes once I've taken them, because I haven't figured out how to either print out or gather up the note card info into one place. Sorting and shuffling the Scrivener note cards, yes.  But actually getting the info from the cards I've made, no.
-wo
Posted by WendieO at 8:41 AM 2 comments:

Check out the Author Amok blog for Laura Shovan's series of 30 Habits of Highly Effective Poets.

She describes herself this way:
By day: a fabulously creative poet-in-the-schools, children's author, freelance writer and educator.
By late afternoon: a fabulously organized (on good days) mom to two kids.
By night: exhausted.
Posted by WendieO at 10:04 AM 1 comment:

Do you need a poem a day?
There is a collection of links to poetry during the Month of April -- National Poetry Month -- at KidLithosphere Central, including someone who is writing poems to and about Dogs.
Posted by WendieO at 12:40 PM No comments:

The amazing Katie Davis has been planning a really fun way to celebrate poetry month. She sent out invitations to every children’s poet she could think of asking to come and celebrate on her blog.
Many amazing people responded including  Doug Florian, someone whose work she completely geeks out over, so she's thrilled. Who else will be visiting? Check out this partial list and make sure to visit her blog every day, starting April 1st.
Alan Katz
Renee LaTulippe
Jane Yolen
Gail Carson Levine
Leslea Newman
Lee Wardlaw
Laura Purdy Salas
Ed DeCaria
Anastasia Suen
Betsy Franco
Charles Ghigna
Michael J. Rosen
Irene Latham