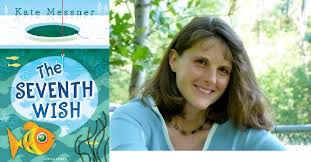 This book has caused a lot of controversy and I'm not sure exactly why.
Basically, it's a retelling of the old folk tale about a fisherman who catches a fish who gives wishes.  But the wishes don't turn out exactly as expected.  (The Fisherman and his Wife)

In this case, it's a girl who goes ice fishing with friends. (My goodness it must get cold where she is because she talks about the ice eventually becoming several feet thick.)
She catches a small fish who totally surprises her when he speaks - Release me and I will grant you a wish.   She was going to throw him back anyway because he's too small, so she quickly makes a wish and drops him back into the hole in the ice.  What wish?  A typical middle school girl wish - that Roberto Sullivan falls in love with her.

But it's the wrong Roberto Sullivan who falls in love with her.
Each time she makes a wish, it doesn't turn out the way she hoped.  Darn.
So, is it the magic/ wishing in the story that is making schools reject this book?

But Messner doesn't write simple stories.  She intertwines several plots here.
There's the wrong Roberto plot.
There's the dancing Irish Dancing plot.  (We learn a lot about dance class and the tryouts (feis) to move up to advanced classes,
There's the fact that her mother needs a better job.
There's her dance friend who needs to pass her English as a second language class in order to be allowed to attend regular classes at her school.
There's her other friend who has a Flour baby for Home-Ec class - a sack of flour she has to treat like a real live baby to teach her the responsibilities of being a parent.
There's a sister who has gotten into drugs and is now in rehab.

So - which of these plots makes this book unsuitable for school libraries?

None of them, as far as I'm concerned.  All the characters are fully developed.  The plots intertwine forming a good view of a busy middle schooler's life.  And, having had experience with a relative who was a drug addict, the plot about her sister and drugs is spot on.  Yes, the drug addict hides his/ her habit from everyone, steals, lies, goes through rehab and then goes back to being on drugs. Again and again.
That last part is very painful for the family and for Charlie herself - because she works so hard to ice fish, selling the fish she caught in order to earn enough money to buy a solo Irish dance costume - and her older sister steals the money to pay for her drug habit. Not only that, she abandons Charlie in a far-off city where she is competing in a feis.
This is a true picture of how drugs take hold of a person and the grief it gives the rest of the family as they try to cope.

Too many children are living through this experience and this book shows these children that they are not alone.  And that wishes can't and won't solve our problems. We have to work them out ourselves.

To see more about Kate Messner, search her website here.

Bloomsbury has created teachers' guides for this book which can be found here. 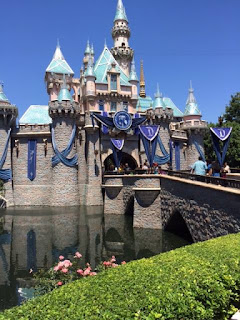 (The sleeping beauty castle at Disneyland. I took a side view because too many large families were massed in front of the castle taking selflies and group photos.)

Last week our family did what a lot of southern California families do - We went to Disneyland.
Because of my crushed vertebrae was forcing me to move slowly, I reserved a suite at a Disneyland hotel so that we could easily get in and out of the park.  My daughter, her husband, and my grandson took over the 'living room' area of the suite while I got one of the beds and my granddaughter and her best friend took the other in the bedroom. This worked very well.
We did things together (celebrated my daughter's birthday) and things separately.

I highly advise anyone going to get the park hopper ticket so that they can spend time in both the basic Disneyland park and the adjoining California Adventure, even going back and forth if they wish.
We got the three day pass even though we only stayed two nights at the hotel.  What a great deal! That way we got to enter the parks Tuesday, the day we arrived, all day Wednesday, and also on Thursday, the day we left. In addition, the three day pass came with extra privileges. YAY!

I loved walking around, comparing the modern Disneyland with the black and white film of its creation that my sisters and I had watched on the Micky Mouse Show in the 1950s.  The two teen girls went off on their own, riding rides and meeting film stars. (Their top adventure was the photo opp with the teen age Sith in the latest Star Wars movie!) 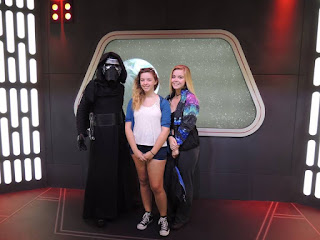 My daughter's family went their own way with their 5-year-old.  Suddenly I got a text that I should show up at Tomorrowland at a certain time because my grandson was going to go to Jedi School.  There he was - in a brown Jedi robe - learning how to handle a light saber, and finally fighting a Sith.  (It took the whole crowd to use the Force to force Darth Vader and his black students back into the Jedi Temple - which then sank into the patio.  Quite a scene!)

That was the best thing about this adventure.  With all of us having cell phones, we were constantly texting back and forth, meeting up to do rides or other activities together, then going off to places that interested us again.  The girls often met up with my daughter and her family and took charge of my grandson, which he loved.

I loved the evening parade at Disneyland the first night as well as the World of Color shown against spouting fountains of water the second night.  We could see the spouting water from our suite at the hotel, but instead of pictures on it, we just saw fantastic colors - but we loved that show as well.  (Almost as good as the fountains in front of the Bellegio in Las Vegas.  Nope, better.)

Yes, we had a great time.  Will we go again?  Probably. If I can save up enough money for the whole family, again.  Because there's lots more I wasn't able to see and by that time my vertebra should be strong again and maybe I could go on some of the quieter rides.

Tower of Terror?  Not me.  Even thought it is highly recommended by the teens in our group.

Have you ever been?
What was your favorite part?
Posted by WendieO at 2:44 AM 2 comments: