Where have you lived?

A Facebook friend asked where their friends lived while growing up.  My answer was very long.

We moved every 3 years or so while I was growing up. I've gone back to several places, but not all. (still want to go back to Monroeton to see if the school is still two rooms for 6 grades) The house in Pottstown, PA was still there. 5th sixth and seventh grades. (My little sister fell from the third floor window onto a bed of ivy, just missing the sidewalk. She was fine.) Once when I was attending American Library Association in Chicago, I came a day early and rented a car to visit my Chicago haunts. The Oliver Wendal Holmes school in Oak Park, IL (also seventh grade) was sorta still there, However, the old school was gone and a new school had been built in what had been our recess (and after school) playground lot. I also saw the house in Glen Ellyn, IL. (eighth and 9th grade) i parked in the driveway and walked around the house and lot. The empty lots around it were now full of houses. A postman asked what I was doing and when I told him, he said the he was the guy who rented the apartment above the garage!!!

The rest of my High School years we lived in Vienna, WV and I attended Parkersburg High School. (bus student) My parents stayed there while I was in college, but then they moved out of town to a farmhouse with acreage which we visited every year. I married and had children who also enjoyed the 'farm.' We settled just north of Baltimore, MD. My parents eventually retired to Fort Walton Beach, FL and of course we would drive down to visit every year.

Posted by WendieO at 7:16 PM No comments:

Labels: growing up, houses, where did you live

Living with a well

I remember depending on a well for water. My husband grew up in a house with a hand dug well. Every year he and his brother had to go down into the well and dig / remove the sentiment to keep water available.

When we moved into the house (1740 stone farmhouse) the well would go dry every summer. (and as an adult, he was too large to go into the well and dig) But we also belonged to a community pool, so we'd go over to the pool to take showers until the water level rose again. City water came to the development to the south of us. Next year came to the development north of us. But to reach us, we had to pay several thousand dollars - which we finally did.

Labels: getting water from a well, living in an old house, well

When I wrote two biographies a year

When I was doing biographies, I'd amass all the research on 4/6 cards, researching over 6 months on days off or taking vacation time, then I'd schedule a week off from work (the end of April or sometime in May was my favorite time because of warmer weather and FLOWERs) and sit at the computer all day and write. (arranging each chapter's research cards on my bed in chronological order, then writing the chapter.

By the end of the week I had 10 chapters/ over 20 thousand words which was the amount needed for those books at that time.

Posted by WendieO at 3:42 PM No comments:

Time to put  up the tree? 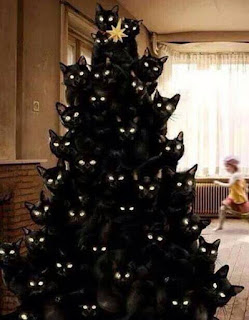 Or maybe time to take down THIS tree and put up the green one?

Posted by WendieO at 9:43 PM No comments:

It's a proven fact that there have been too many humans on this planet for the last 50 or more years. Also a proven fact that, when a group of (plants or animals) become too many for their environment, bad things happen. disease or starvation. We staved off starvation because of learning intensive farming and drilling deep down to the last supplies of underground water. But now disease has hit us.

--- In 2019, there were 7.7 billion. By the end of the century the UN expects a global population of 11.2 billion. But that was before COVID-17 began cutting down the human population.
Posted by WendieO at 3:53 PM No comments: