Two pieces of advice for the aspiring writer:
"First, actually write, however seductive it might be to just sit around pouting in a special hat. Even if you end up hating the things you write, you’re getting incredibly valuable experience. And as soon as you actually write, you’re a writer.
Second, the thing we want to hear from you is what makes you unlike any of the rest of us.
Lean toward your own eccentricities.
Be aware of how they might strike your readers – but remember that it is the very thing that makes you different that will make you stand out and be heard."
Posted by WendieO at 7:00 AM No comments:

Labels: advice to writers, MT Anderson, what makes you different will make you stand out, Writers quotes

G.K. Chesterton quote featured in The Writer's Almanac today:
"Fairy tales do not give a child his first idea of bogey.
What fairy tales give the child is his first clear idea of the possible defeat of bogey. The baby has known the dragon intimately ever since he had an imagination. What the fairy tale provides for him is a St. George to kill the dragon."

Writing on a computer

I wrote my first stuff on paper, then revised as I put it into the computer. It was a scary day when I sat down to put original thoughts directly into the computer.
My husband said to save everything on the computer. Why are you printing out paper copies?
Now I'm sad, because so much of my earlier writing is lost. On 5 inch floppies. On 3 inch floppies. On files in my computer that no longer can be read by any word processing programing on my current computer. (I lost some of my favorite recipes that way as well.)
Yes, we've had computers in our family ever since 1989. It was a big deal in 2009 when we bought computers for each and everyone in our family. Now I worry that they'll die and I'll lose everything that I've saved on them.
Posted by WendieO at 4:17 PM No comments:

"The writer has the gift of time and the plasticity of her tools.
Hate a sentence, a character, a plot device? The delete button is your friend!

There's great joy in being able to erase/delete mistakes in a piece of writing.
Aren't we writers lucky to have such a malleable art form!"
Jane Yolen

It's like knitting.
You have to go back and forth, building the thing up.
But if you don't like it, it's easy enough to drop down and fix something, or even disassemble the whole thing and reuse the parts.
Brenda Clough

Posted by WendieO at 9:00 PM No comments:

When you first retire

My husband retired September 2010, before I did. (I retired January 2012)
But his first month was a bit difficult:

Here's what I wrote to a friend a few weeks later:


His record so far this month --
2 broken lawn mowers  (actually the attachments , grass cutter and the bricks sweeper)
1 computer e-mail system wrecked and rebuilt
1 eye stopped working, which meant he needed lasor eye surgery a couple of days ago.
1 idiot at Social Security who went on vacation for a month (we thought she was fired for giving everyone a 'blessed day' right as she hung up after calling the caller an idiot, didn't move his case file to anyone else, which means that his social security won't begin on time, will be about a month late in beginning.  irk.
1 week of total joy and rubbing it in that HE didn't have to get to work
and 1 week of semi-depression.
(we'll see what next week brings)

Plus several times of him being a jerk and being surprised when I didn't quietly take it, but told him I didn't like him treating me like an idiot.
Tonight he called my working at the computer a computer addiction.  I was so flabergasted that It was only later that I realized I should have pointed out that HE spends twice the time on the computer than I do.

We'll see how he is when he finally gets adjusted.

So - how did YOUR husband take retirement?
Posted by WendieO at 7:00 AM No comments:

May - the time of flowers and sun.

It's also time for housecleaning.  If your house is okay, then computer files cleaning up is also good.

Here's one of my favorite flowers - that shows up in MAY! 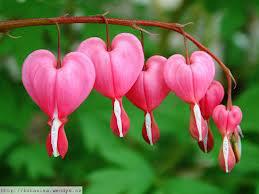 Posted by WendieO at 1:44 PM No comments: