Check out the I.N.K blog (Interesting Nonfiction for Kids).
Check it out every day this month.
Because this month they are featuring life-changing nonfiction and how it influenced them.
See if they talk about some of YOUR favorite childhood books.

The Nonfiction Monday roundup is being featured today at Stacking Books.
Go check it out, as well.
Posted by WendieO at 8:00 AM No comments:

Here's a couple of links I found interesting today --

Like Sharon Darrow, I also grew up with the motto -- when you begin a project, you need to complete it before going on to another project.  But her husband's philosophy sounds so much more workable; a much better way to manage your time and energy.  She calls it S.W.E. P.T.

On another note -- Is your memory disappearing?  Has using GOOGLE destroyed people's ability to remember things?  Interesting thoughts over at Slate.com today. 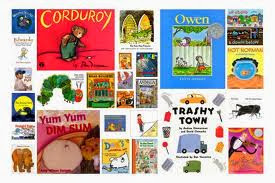 Why are picture books thirty-two pages?  Why not seventeen? or thirty-six?  It's all because of how they are printed.  The Writer's Rumpus blog has an article showing exactly why you have to write short for a picture book.  Click on over and see how it's done. Single space or Double space? Which are you?

Now, just call me an old fuddy-duddy, but I have to confess something.

Event though I've been told that the new rule is to single-space everything you type (keyboard?), my fingers don't always remember.  I was taught on a typewriter, where the rule was to double-space between sentences and after colons, because it made it easier to read. And now my manuscripts seem to be a combination of both, depending on how fast I'm typing and whether my fingers remember to single space or not.

I also thought that the reason publishers were now requesting single space was because they could save money and print books with less pages that way.

It turns out that the single-space rule isn't that firm -- there still is some discussion about it.
Check out these articles and blog posts:

Why two spaces after a period isn't wrong on a website called Heraclitean River.
and
The Punctuation Conundrum on Kathryn Gagalione's blog, Hers for the Reading.

and from the MLA rulemakers, themselves :
MLA

Posted by WendieO at 3:49 PM No comments:

Friday the 13th -- Sting Rays at the Beach

Friday the 13th came on a Friday this year, and I have to say that nothing happened.
Nothing bad, that is.

Since I'm in a break between Packets for college (Packet 2 is in my advisor's hands and I get this breather room before she sends it back and I have to attack revisions, again), I took a group of teens to the beach right after school on Friday.

Since it was high tide, I was worried that there would be little or no beach to set down our stuff. Although the water licked the rocks at the beach entrance, we managed to find our way down to sand further along.  The girls grabbed their boogie boards (short surf boards made of foam, not wood like the expensive ones), and took off while I settled in my chair to read my book -- which wasn't there!  I had forgot to pack it.

So, I walked the beach, instead.
A little while later, while the girls were digging holes and building sand castles (they never outgrow that), the lifeguard jeep came by, warning people about the sting rays.  "Be sure to keep your feet on the bottom at all times - and shuffle your feet to let them know you are coming!"
Yikes.

(And now you know why I walked along the edge of the surf in my bathing suit, instead of going into the water.)

The girls had a grand time -- and nobody on the beach was stung by sting rays, so that's why I can say with confidence that nothing happened.

After the beach, the girls met up with several other girls to have a study party and sleepover.
My teen insists that she has ALL her homework done, now.
Posted by WendieO at 12:47 PM 1 comment:

I would inbed this video into my blog, if I only knew how.

Since I don't -- here's a link to the Picture Book Party blog that has a video where the wonderful David Allender talks about the ten most popular trends in books from Scholastic Press this year.  I've read some of the books he mentions, and they are great.

This is the sort of thing that Scholastic offers at the American Library Association is one of my favorite things to attend.  Now, with the invention of YouTube, everyone can see/ hear the publishers book offerings.

Posted by WendieO at 9:56 AM No comments:

Every Monday, bloggers in the KidLitosphere (yes, that is a word -- not only a word but it's a whole group gathered together on YahooGroups to discuss blogging about children's literature) hold an event called Nonfiction Monday.

Today, Nonfiction Monday is here.
As the day progresses, more and more links will be posted here, so do keep checking back (or come back on Tuesday).


The first link is to NC Teacher Stuff where Jeff Barger has examined Mozart: the Boy who Changed the World with his Music. This book was written by Marcus Weeks and published by National Geographic Kids, 2013.  (It certainly looks like a National Geographic book, what with that yellow border and all.)

Reshama Deshmukh at the Stacking Books blog is featuring What Charlie Heard by Mordicai Gerstein. Published by Farrar, Straus and Giroux Books for Young Readers in 2002. She saw it at the library and her children demanded they bring it home -- again.

Razia's Ray of Hope by Elizabeth Suneby, was published by Kids Can Press just a few days ago -- September 1, 2013! And the blog, Perogies & Goyoza has already reviewed it. It's about a girl's struggle to get educated in Afghanistan.

Sue Heavenrich over at Sally's Bookshelf wants you to sharpen your observation skills and learn about ecosystems with  Hide-and-Seek Science: Animal Camouflage by Emma Stevenson, published by Holiday House, 2013.

There's a craft book at the Jean Little Library called Fun With Nature by Annalees Lin, published by Windmill books, 2013.

And over at Randomly Reading,  Alex has featured a picture book for older readers about the rescue and rehabilitation of a Chinese Moon Bear named Jasper:   Jasper's Story: Saving Moon Bears by Jill Robinson and Mark Bekoff, published by Sleeping Bear Press, 2013.

Anastasia Suen talks about Showtime: Meet the People Behind the Scene by Kevin Sylvester, published by Annick Press, at her Booktalking blog.

For those interested in STEM, Roberta looks at Hi-Tech Clothes by Richard Spilsbury, published by Heinemann, 2013 at the Wrapped in Foil blog.

Ha!  Now here's a book that I've had requests for -- over at Check It Out you'll find Electrical Wizard, How Nikola Tesla Lit Up the World, by Elizabeth Rusch, published by Candlewick Press, 2013.

There's a bit of excitement over at The Booklist blog, Bookends. Cyndy and Lynn are checking out The Nazi Hunters: How a Team of Spys and Survivors Captured the World's most Notorious Nazi, by Neil Bascomb, published by Scholastic, 2013. Lynn says it has all the breathless suspense of a best selling spy thriller, and yet it's all true. They even help you make the Common Core connections with this book.

Tammy at the Apples with Many Seeds blog reviews the beautiful handmade book from India, Waterlife by Rambharos Jha, published by Tara Books, 2012.

Zooborns: the Next Generation -- Newer, Cuter, More Exotic Animals from the World's Zoos and Aquariums , by Andrew Bleiman and Chris Eastland, published by Simon & Schuster, 2012 is discussed at SonderBooks blog -- an incredibly cute kid-pleaser.

Why you need to belong to your professional writer's organization

Each serious profession has their own professional organization -- a group that most all serious members of that group belong to in order to be considered seriously dedicated to their job.

Librarians have a professional organization called The American Library Association. And there are local groups at the state level. Both hold conventions to aid in the continuing education of the group.

Here's one person's ODE to the SCBWI -- 15 reasons why I Love the SCBWI, written by Joanna Marple over on her blog, Miss Marple's Musings.

Follow the connections there if you too are interesting in being considered a professional writer.
Posted by WendieO at 12:12 PM No comments: