Quite a disruption around our house this weekend.  The teen, now that she has a job and is RICH, decided she wanted to replace her bureau (a 100 year old maple highboy) (still very sturdy) with something new, something larger, something Not Brown. So off to IKEA we went.
(Actually, what she said was that she needed something to put a new fish tank on. Something small, like a bedside table.)
I shopped in Costco while she searched IKEA.
She found what she wanted, so I drove back to IKEA to see.  After much discussion (but you went to IKEA to get a bedside table to hold a fish tank and now you want a bureau, instead?), she decided which one she wanted.
So -- we did what those who go to IKEA do, we went downstairs to find the box(s) of bureau parts. But all we found were empty boxes in the bin which should have contained the parts.  So, off she went to get help.  The helpful lady found the last 3 boxes containing all the parts for her pretty white bureau -- but one part was damaged.
So -- off we, and the lady, went to the land of replacement parts.  Where she not only talked the replacement parts man into replacing the damaged part with something he had on hand, but talked him into giving her a Reduced Price.
SCORE!
Once home with the 3 heavy boxes (which she loaded into the car by herself!!!), she and a girlfriend began putting it together.
But wait.  What to do about the now unwanted maple bureau?
After much discussion, (yah, you've heard this before.  It means she talked me into...) it was decided (by her) that they'd move a small, four cube IKEA bookcase from my bedroom into the living room to hold children's games and they'd move the maple bureau into my room.  "Look Grandma - it looked hideous in my room, but looks great in Your room."  (actually, she's right, it does.)
So -- the new bureau is almost put together (will be completed today, or tomorrow) and I now have more storage space in my room.
SCORE for both of us.

And how was your weekend?

Labels: almost new bureau for me too, go shopping for something small and end up buying something much larger, IKEA, new white bureau

Should an author come to your school for free?

This was just posted today by author, Martha Brockenbrough:  (click on through to find out more about her)

Please stop asking us to work for free. Please stop saying, “It’s for the kids.”

If you work at a library or a school, every professional who walks through those doors is paid. You wouldn’t call a plumber and say, “Unclogging this toilet is for the kids.” It is, of course. So are the lightbulbs. The napkins. And so on.

Most writers don’t make a living wage. Most have day jobs. Many supplement their income with school visits and the like. We don’t have paid leave from our jobs. The time we spend on this comes directly from the time we have to create.
(for example - I worked 30 years as a children's librarian in a public library system and took vacation time to research and write my books and also spent more of my allotted vacation time to do school visits. I very seldom actually took vacation.  I was literally working two jobs.)

So when you are manipulating people’s emotions to get this for free, you are taking time from someone who already makes less than minimum wage. You are also taking opportunities from someone struggling to get by.

It’s crappy that schools and libraries are underfunded. Let’s not further undermine the professionalism of people writing and illustrating for them.

Oh, and writers: You don’t have to say yes to these gigs. People who aren’t paying you also do not value your time and are likely to be ill-prepared to make the most of this—something I say from unfortunate personal experience.
Posted by WendieO at 5:49 PM No comments: 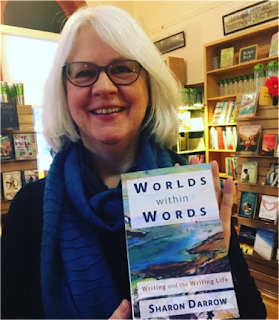 One of my favorite faculty members at Vermont College of Fine Arts in the Writing for Children and Young Adults department, Sharon Darrow, has published a book of her lectures.

When I offered a picture book manuscript in a workshop at VCFA run by her, she told me that it read more like the outline of a middle grade novel than a picture book, which changed my whole view of it.  And I spent the next few semesters enlarging it and building the world where those characters lived.

So, if you'd like to get a taste of the kinds of things we learn in this graduate course about writing, I highly recommend her book, Worlds within Words, Writing and the Writing Life.

You can read a smidgen of it here on the Cynsations blog
Posted by WendieO at 7:07 PM No comments: