Yes, it happened again. Nonfiction Monday is being celebrated on a Tuesday this week. (That's what happens when the Summer Reading Program begins at a library -- other things have to take their turn behind registering children and organizing the Database.) 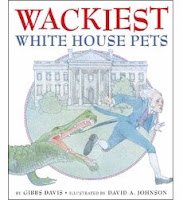 To save time, I'm going to quote the publisher's blurb about the book: White House pets come in every size, shape, and species. What are some of the pets that belong to the world's most powerful men and their families? John Quincy Adams' alligator liked to slither across the White House steps and was fond of chasing the guests! Thomas Jefferson took walks around the garden with his pet grizzly bears! James Buchannan received a herd of elephants from the King of Siam! William Howard Taft, who was fond of creamy fresh milk, kept a milk cow in the kitchen!

A list in the back of the book includes almost every presidential pet -- mostly dogs.

If you look carefully (I know, it's hard to see exactly what's on the cover because the duplication is so pale), you'll see President John Qunicy Adams (son of John Adams) being chased by a 'pet' alligator -- actually the alligator was the pet of a visitor who stayed several months in the White House. (which actually was called the President's House at that time, but this book doesn't tell you that.)

In fact, there are several historical errors in this book. I can't tell if the author just didn't know -- or the publisher simply wanted to simplify things to keep the word-count down. For a list of some of the errors, check the reviews here.

If the author didn't know, he should have taken the trouble to find out. As a non-fiction writer, I try to be as sure as I can be about what I write. Sure, an occasional lapse or error will slip by. But to be "riddled" with historical errors and full of generalizations makes this a book I do not want to give my grandson. I'd rather he got one written by an author who took the time and trouble to check his facts.