In November our hearts and minds turn to pies.  Pumpkin pies, in fact.
I used to have to bake a round dozen of pies during November. (and repeat, but with less pies in December)  But nowadays, being retired and a widow, there are less pies necessary.

It got so I stopped making homemade crust and bought ready made ones at the grocery store.
(have you tried Marie Calendar's piecrust?  It's the best.) 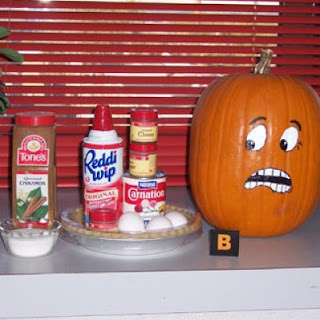 Actually, this is not my recipe.  I don't use the condensed milk one.  I use an old Fanny Farmer cookbook recipe with real milk and four eggs.  The whipped cream is vital for serving, but for family I usually whip the heavy cream, adding vanilla and sugar.
I just thought the expression on the pumpkin was funny.

This year I'm only making four pies in November.
Two last week when my nephew, Chad, came to town and we had a family dinner. (at a Mexican restaurant)
And two this week for Thanksgiving.
YUM! 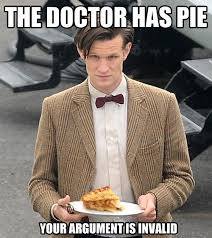 And the Doctor has the last word.
There is no argument against pie.  November is pie month.
Posted by WendieO at 12:11 PM