Well,  June got very busy what with the teen's prom and graduation and then our flight eastward. 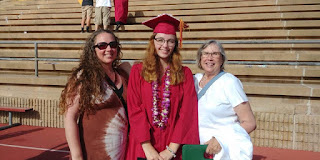 The teen, bookended by her two moms.  I'm the one on the right.

Why did we fly back East?
Well, the teen wanted to visit friends in Florida and I was headed to the celebration of the life of James R. Shoemaker near Philadelphia, PA. (Jay died last summer of a sudden heart attack with no warning.) He was named after my father, Jame Ross Corbin, and like my father James Shoemaker was called Jay.  His mother, Cordelia Mawson, organized the event. 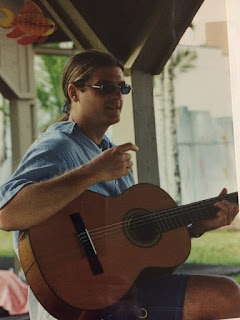 Which meant - four flights for me to get to Philly.
We got up around 4 in the morning on Wednesday, June 20 - my birthday.  My oldest daughter, Jennifer, drove us to the airport around 5:00 to catch a 7:00 flight.
Flight one -- to Nashville, KY.   The plane was small and our knees were touching the backs of the seats in front of us.  Ouch.  (We slept for part of that trip, since we couldn't move, anyway.)
Flight two -- to Jacksonville, FL.  Much larger plane with more comfortable seats and room between us and the seat in front.  I had planned to walk the teen to the security area and see her meet with her friends, but there was only a few minutes between emptying the plane and the re-load, so I didn't have time to do that and get back to my plane which was flying on to Fort Lauderdale. So I stayed put and teen texted me when she was met at Baggage by her friends.
Flight Three -- by this time it was getting dark on the east coast, but it was an uneventful trip.  However I didn't have a long layover here, either, so one of the flight attendants ran out into the airport to discover where my next flight was.  Hey!  What luck!  It was right next door.
Flight Four -- For some reason, flight four was delayed and I didn't get into Philadelphia until after 11  pm.  (it was due to land at 10:30)  And it was a long walk to the exit where I caught a bus to the rental car place.  In the pouring rain.
Rental car place.  Very nice person.  Usual mix-up trying to figure out how to apply my AAA discount, but that finally got worked out.  Now, I was accustomed to them finding a car for me and driving it up to the rental building so I could just pop right into it.
But no.
Pouring rain, remember?
My choice of cars was located in lot 3.  Ho-Kay.  Out into the rain, pulling my suitcase, through lot 1 and then lot 2.  left my suitcases at the beginning of lot 3 and wandered up and down the rows, choosing a car.  suitcase getting very wet.  Me with a lightweight umbrella trying to stay dry.  By the time I chose a car (Chevy Cruise, which I loved), it was after midnight and I was dead tired.  I decided that I didn't want to drive in the pouring rain to Horsham, PA that night.  I knew those roads and some were not good in a rainstorm.  So I slept at the Airport Hotel.  (took me a half hour to find it and another half hour to get checked in, park the car, settle into the room, etc.)
The next day was sunny and warm.  I had no problem finding the Quality Inn where all the relatives and friends were gathering.  But -- the rather nasty lady at reception (blond, white woman) put me in a smelly, dirty, rug-stained room.  I was ready to change motels until my brother convinced me to request another room.  Nasty lady had left for the day and a very nice POC man placed me in a different room.
The next day I woke up with hives.  Found a nearby drug store and got Benedril.  The day after I woke up with bug bites and the day I left I woke up with nothing.  I still think there were bedbugs in that room.  So my luggage is now in my garage, having been sprayed with Home Defense and will stay there until my next trip.
One of my sisters, Sandy, who never travels, managed to fly up for this event, with the help of a wheelchair and a cane.  My baby sister, who is a professional artist, stayed in downtown Philly for several days visiting art museums.  Also went to the Redding market, which is an old train station now full of small businesses, mostly food.  She sent me pictures of Pennsylvania Deutch sticky buns and offered to buy some for me.  YES!!! 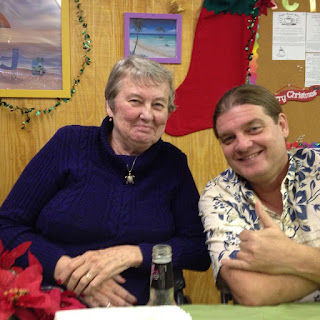 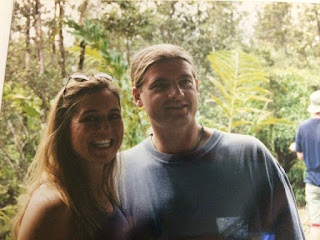 (His mother, Cordie and Jay - He had long hair down his back)

Saturday was the Celebration of James Shoemaker's life.  I arrived in a car driven by my brother, Don (also known by his middle name, Rex, in the Air Force).  One of the other passengers was Hawaiian and a good friend of Jay's, now a lawyer in New York City.  Other Hawaiians also attended.  Various people stood up and told us tales about Jay and their interactions with him. (ask me about the camping trip story.)  One of the Hawaiians sang the "Hawaiian Over the Rainbow." Also his partner in life, Pate, talked about their life in Hawaii. 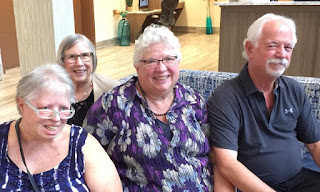 As you can tell from above, this was also a gathering of the Corbin children, Sandy, Marion, Donald,  and me.  (I'm the one peeking from behind.  The couch pillow under me kept sinking and sinking as pictures were taken.)  I"m really not the shortest one of the family. (am I?)
Sunday I took Sandy to the airport, dropped her off at the departures area for her plane and made sure she was connected with a wheelchair and a person to push her to her plane.  Turned in the car and made it to security for my own flight.
Problems.
Suspicious item in my bag.  As the TSA person looked at the screen (a brown square circled) and opened my carry on bag, I tried to think what could be different from when it passed security in San Diego.  Oh yes.  THE STICKY BUNS.   Right. That brown mass was my bag of sticky buns.  The TSA person agreed that yes, they did smell good, then wrapped them back up and I was finally on my way home.  We landed in Denver for a layover and I got a steak sub for lunch.
Flight two was supposed to take off from Denver early in the afternoon.  However, a strong thunderstorm stayed over the airport for hours, forcing approaching flights to detour to Albuquerque, NM to refuel.  We sat and sat and sat, waiting for a plane to land.  Finally about 6-ish it was our plane's turn to land and we were allowed to board the plane.  (meanwhile I had eaten the other half of the steak sub for Dinner!)
My darling oldest daughter kept track of the flight delays and was there to drive me home.
YAY!
Yes, the Sticky Buns were delicious.