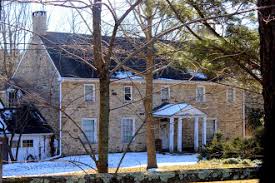 This is a front view of our old house (built in 1740) in Maryland.  It's called The Cub Hill house and the neighborhood around it is called Cub Hill.

There are 2 acres of land attached to this house, the remains of acres and acres of the original farmland that was sold off for development. That's when my husband's parents bought the house and the 2 acres. The house was a wreck and they spent a long time making it habitable, living in it all the while. They couldn't afford to buy the other acre and a half where the barn was located, so another person bought that. The property was overgrown and his parents bought several goats (male goats are very stinky) to chomp on the underbrush until they finally had space for a lawn. Parts still are wooded area, but there is a large front and back lawn.

Another part is where there was a quarter acre garden that I planted and took care of and canned the produce. We moved in (with two children) to help his older parents take care of the place because it was getting to be too much for them. Then we inherited it. But we were both working full time, so no more garden.

This is the front of the house which used to face Old Harford Road (when it was called The Harford Road, but over the years the road has moved away from the house and now runs along side it. Because of that, we never used the front entrance, just one of the three back entrances to access the back yard and the car parking area.

When my husband died, I knew my granddaughter and I couldn't keep it up ourselves. (it was a huge job to shovel out to the road during snowstorms) So I sold the place and moved to California where my children are now living. (yay - no more snow)