I've done a baaaad thing.
After hearing other parents talk about their second and third graders reading the Harry Potter books, it occurred to me that maybe it was time to introduce my 9-year-old to them. After all, she's going into the fourth grade in September. And she's seen all the movies so far. 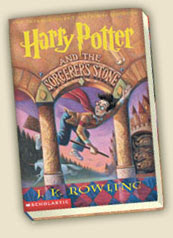 So, this evening I did the same as many teachers have done to hook kids into reading something. The two of us sat down and I began reading the first chapter of Harry Potter. (HP and the Sorcerer's Stone) When Granddad peeked into the room to see what we were doing, the 9-year-old bragged that Grandmom was going to read the whole Harry Potter book to her. "Shouldn't you be reading it?" he asked. "No, Grandmom will do it."

Well,
Since it was getting late, I stopped at the end of the first chapter. (Intending to read a chapter a night for a while, until she got the urge to read it, herself.)

"No, no! Don't stop!"
She grabbed the book.
SHE intends to keep on reading it. The heck with waiting for Grandmom to read it.

When Granddad stopped by her room to say Good-night, she went on and on about how there were many more things happening in the book than in the movie!

Ka-Chung!
Another reader is hooked.
-wendieO
Posted by Wendie O at 9:52 PM

As a child I received so much joy from reading so it's wonderful to hear of another child entering the reading fold. Books can be magic.
Maureen Hume (www.thepizzagang.com)

My four-year-old grandson loves his books. When Mom or Dad or grandma (me) or grandpa reads to him at bedtime, he grabs the book after the reading, and lies down with it to go to sleep. And the library is one of his favorite places to go.

It's really amazing. Both my grandchildren are avid readers -- even tho their mother never liked to read. Nice to know they take after their grandparents. -wendieO