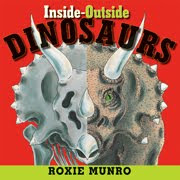 Well, I asked the person who processed new books in our library branch for a new, limited vocabulary nonfiction -- and that's certainly what I got. Limited, yes = only three words per double-page spread. Easy-reading, not necessarily. Well, adults have problems with those dinosaur names, but not kids. Put this in the hands of a dinosaur-loving kid and they'll rattle off the names likity-split.

The next page shows a scene, in full color, with the Brachiosaurus front and center, with other dinosaurs nearby -- flying, chasing prey, eating, etc.

(note to self -- check to see if all these beasts lived in the same Jurassic period. I just have a sneaky feeling that that armored one on the right lived quite a few centuries earlier -- in another epoch, as a matter of fact.) (Ah, The reason I'm confused is because the Gargoyleosaurus shown in the picture looks much like the Ankylosaurus from the Cretaceous period shown a few pages later.)

In the back of the book, there is a little more information about the main dinosaurs featured on a page. However, there is no information (except for the names) of the other dinosaurs pictured.

Seeing these pictures first with skeletons and then in full color, we can often see right off how they were named. The 'crested lizard" has a huge crest. The "plated lizard" has plates sticking up from its spine. And my favorite, the Triceratops or "three-horned face" does have three horns.

But the "arm lizard?" That still confuses me.
I'd better find a 5-year-old to explain it to me.

Jump on over to the Practically Paradise blog to check out more Nonfiction Monday reviews.
-wendieO
Posted by Wendie O at 2:04 PM