Nonfiction Monday -- Nubs, the True Story of a Mutt, a Marine & a Miracle 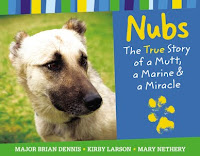 Nubs, the True Story of a Mutt, a Marine & a Miracle by Major Brian Dennis, assisted by Kirby Larson and Mary Nethery. Illustrated by photographs. NY: Little Brown, 2009. Available now.

This story of a dog in Iraq has touched the hearts of millions of people.
Why?
He was the leader of a pack of semi-wild dogs near a fort in western Iraq on the Iraq/ Syria border. U.S. Marine teams visiting the fort made friends with the dog and named him Nubs -- because his ears had been cut short and all that was left was little nubs of ears. But his special friend was Major Brian Dennis.

Then came the day the Marines stopped by the fort, only to discover Nubs had a deep painful wound. When the Marines left this time, Nubs dragged his wounded body 70 miles south to their home base and jumped into Major Dennis' arms, licking frantically and wagging his tail off. (I have to say that the map of his journey needs an arrow, pointing the way the dog traveled. I'm a good map reader and when I originally wrote this, I had everything reversed. The moving map on Nubs' website helped straighten me out.)

Soldiers are not allowed to have pets at the outposts. What do do? Major Dennis adopted him, got him a passport and got him transferred home to San Diego, California where he lives today. (Major Dennis is now stationed at Camp Pendleton there)

Who paid for the dog's plane ticket? Many, many people donated money -- both local soldiers who knew the dog and many friends of friends back in the states.

Naturally, when the book talked about the Nubs loving the Dog Park and Dog Beach, I immediately remembered that my San Diego Granddog, Lance, also loves to run and play at those places. Hmmm, I wonder if the two dogs have met? (note to self -- ask my daughter)

Is it easy-reading? For a second grader, probably. The typeface varies from large to huge, but the best part of the book is the photographs -- actual photographs of Iraqi countryside and American soldiers interacting with the dog. (you think of Iraq as being a hot, hot desert -- but winters must be cold. People are bundled up and there is snow.)

This book is getting a lot of press and surely will be considered for the Sibert Award. (I'll not attempt to predict how the committee will vote.)

Watch a video of Nubs here. Nubs also has a website.

More Nonfiction Monday reviews are over at the Book Nosher.
-wendie Old
Posted by Wendie O at 2:20 PM

Labels: Kirby Larson, Major Brian Dennis, Mary Nethery, Nubs the True Story of a Mutt a Marine and a Miracle