Usually deer attack cars during the fall - during mating season, but a friend of mine was attacked last night by a male deer.  She was taking the back road from Pennsylvania to Bel Air, Maryland and it jumped out into the road, crashing into the front grill of her car. The grill is now dead, but she survived with minor injuries. 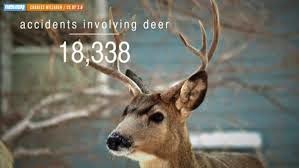 This put me in mind of my own experience of being attacked by a male deer.

Coming home from Fallston one evening on Glen Arm Road, a deer jumped out (full rack male) attacked the car ahead of me which began sliding sidewise, and in the next second crashed into my driver's side.
As soon as I opened my eyes again, I desperately braked, finally coming to a stop four inches from the back passenger door of the car (sidewise, remember?) in front of me. When I got my breath and took a good look at the people in that car, I realized I was four inches away from smashing into a child strapped into a child's seat.
I'm not sure how damaged the car ahead was, he was able to drive away, but my only damage was a big dent in the driver's side door and blood and deer hair all over it and the window. From then on, I tried to avoid driving on back country roads at twilight - because that's when the deer come out of the woods. And Attack!
Posted by WendieO at 1:54 PM