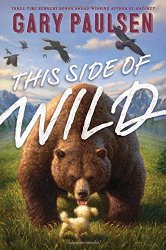 Another snidbit of Gary Paulsen's life, this time ranging from himself at age 18 to an elderly 67-year old preparing to run the Iditarod race in Alaska. For the third time.
At age 18 he was part of the army's nuclear-warhead school and he had just learned that atom bombs wipe out huge populations so fast that people don't know what hit them - just POOF, and they were evaporated. And the dog who conversed with him.  Yes, he talked to a dog and it not only answered, but offered to share her stick and ball with him to make him feel better.  She couldn't change his job in nuclear-warhead school, but she could make him feel better inside.

The tale of the third Iditarod actually opens and closes this book. Firstly it is not about the Iditarod itself. (Eventually he decided that although the mind was willing, the body just wasn't cooperating.)  This first story is about the tiny house dog ( a toy poodle) who made it his charge to protect Paulson - from bears and other dangers.
And the last story is about how very, very, very smart ravens are - and how they train people and their dogs to serve their (the raven's) needs.  Mostly about food. His sled dog's food which became the Raven's food.  (with a side comment about how ants are the most successful species on the planet.)

Written in the style of one of his other autobiographies, How Angel Peterson Got His Name (a book every mother of a young boy needs to read to learn some of the various disasters boys get into - on purpose), each chapter begins with an intriguing title and ends with a zinger. (see above about the ants.)
Posted by WendieO at 11:16 AM