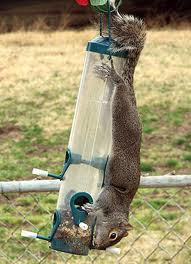 We have bird feeders all with squirrel protectors on top.
A lotta good that does. Our squirrels learned long ago (and have passed it down to all their children) how to leap off the tree limb, slide around the squirrel proctors, skoot down the bird feeder head-first, to enjoy the feast there.

Even the square cage of suet isn't exempt. They just slide down the wires holding it.

But the topper was when I caught some squirrels 'flying' over to the bird feeders.
They paced back and forth on the tree limb. Scooted part-way down the tree trunk, then with a mighty leap they managed to reach the bird feeder before falling to the ground. Unfortunate things happened to any poor squirrel who was already on the bird feeder when one of them did this leap-flying trick.
Crash into the feeder!
Smash!
The surprised current occupant fell to the ground, still clutching the sunflower seed he had been chewing on.

Last week my husband bought special squirrel food for them and scattered it on the grass about 10 feet from the bird feeders.
Oh my. What a fuss they made over that.
(Looky -- whole peanuts in the shell.)
One squirrel raced to the pile of food, grabbed one peanut and raced off with it. Then another. and another and another. What a fight, with nasty squirrel chittering, if two of them grabbed the same peanut shell! A tug of war settled the matter.

Have you managed to figure out how to keep squirrels out of your bird feeders?
-wendieO
Posted by Wendie O at 6:55 PM

Before the branch broke, our feeder was arranged as: Chain hung over high(er than I could reach) branch, secured to nail at convenient height to let me lower the feeder, then raise it again to where it could be seen from the dining room. From top to bottom it was: length of chain, dome baffle, bowl feeder, tube feeder with platform base, suet feeder (hooks, they're wonderful). The distance from chain to branch was almost exactly the length of a full-grown gray squirrel at full extension. I know this because the squirrels would cling to the branch with their hind legs, extend their entire length along the chain, release, slide past the baffle, and catch the bowl ports on the fly-by. Or not, as the case might be. Many's the time the gaming group gathered around our dining room table stopped in mid-battle to watch and applaud this feat.

One day a squirrel missed and landed directly on the mighty hunting cat lurking below waiting to rise like a shark and snatch a bird off the platform feeder. The cat ran, crying: "Agh! Crazy squirrel!"

The way I figure it, most of the birds who get my seed are house sparrows and rock or white-winged doves, both invasive species. Gray squirrels are at least native.

Oh Peni -- That's it, exactly.
But, I did forget to mention our cats in this post -- sitting there, under the bird feeder, waiting for some clumbsy bird to 'fall' into their mouth. chirping, "here, birdie birdie."

I read your comment to my husband and we both laughed so hard, we cried. So true. so true.
=wendieO