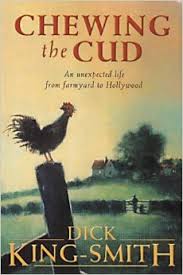 This isn't a children's book. It's Dick King-Smith's autobiography and it's definitely aimed at fans of his books.
What books?, you ask.  Hmmm. You do remember that little pig who herded sheep?
Yes, he wrote Babe, the Galant Pig (known as Babe, the Sheep Pig in the United Kingdom where it was first published.)
Babe -- the very popular movie.

But this wasn't his only book. (he wrote over 100 books)  Nor was writing his only means of support. 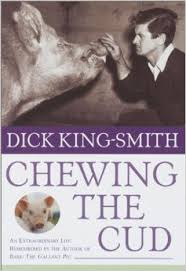 Dick King-Smith was a failed farmer, a soldier, a salesman, a factory worker, and a teacher.  But he always loved animals, he and his family always had animals around, and this shows in the books he wrote, which are well-loved by children all over the world.

Readers will see how this collection of experiences gave him much fodder which he used in his writings.
Posted by WendieO at 7:00 PM