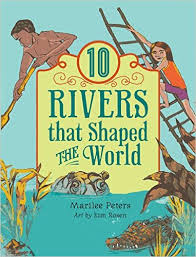 The Awash, a river of bones
The Tigris & Euphrates, twin rivers of civilization
The Nile, the giving river
The Rhine, An International River
The Amazon, a world of water
The Zambezi, exploring the river of freedom
The Thames, the river that built an empire
The Mississippi, a river of song
The Ganges, river of faith
The Yangtze, a changing river

Traditionally, I mostly review picture book nonfiction for preschoolers and up to 2nd grade, but this book, although skinny, would probably be of interest more to third grade and up.

Each chapter begins with a story about a possible child living near one of these rivers - from ancient history to modern day.  Then there's a quick sketch about what made the river famous or important to the people living near it - from farmers to kingdoms, to robber barons charging ships who tried to pass their castles on the rivers.

Besides large chapters on those major rivers, the author often includes one page sketches of other important rivers.

Heavily illustrated with photographs, maps, and artwork.
Posted by WendieO at 9:23 PM

This looks really interesting. My library has it on order so I'll add my name to the list. Thank you for the heads up!