Okay. Okay. I AM aware that nofiction Monday came on a Tuesday this week. That will happen when Mondays are crazy, crazy. (Packet 5 was due and sent to Vermont College late Sunday and Monday was dedicated to planning the library's programs for March, April, and May. Let's not think about the Summer Reading Programming stuff due in several weeks.)
Anywho. 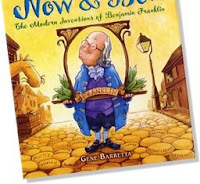 What a neat picture book/ science book/ invention book/ etc. As you move through this book -- on your left is today. And items we use today. And over here on the right is Ben, using the invention that he created that is either still being used today, or else was the origin of something we use. A-Maz-Ing!

The author, Gene Barretta, is an illustrator who has worked many years in film and TV production. He lives near Philadelphia and even named his son, BEN !