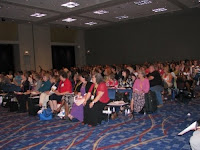 As you can see by the picture that Anastasia Suen took from the stage looking at our audience, the Nonfiction Book Blast last Sunday Morning at ALA was just packed. We think over 300 people attended. Four or five of us speakers (including me) were already on stage when this picture was taken, but you can see the rest of the 17 speakers sitting there in the front and second rows closest to the camera.

(If you click here, you'll jump to the active Nonfiction Book Blast Wiki. Feel free to add your own booktalks there to share. I know. Mine isn't there yet. I'll get around to adding mine, later.)

The Nonfiction Book Blast was from 10:30 to 12 noon. Many of us had book signings at our publisher's booths that afternoon. Since the two books I had talked about were Albert Whitman books (The Halloween Book of Facts and Fun/ plus The Groundhog Day Book of Facts and Fun), there I was at 2:00 signing copies of these books at their booth in the Exhibits area. I signed for a full hour without stop. In fact, several times a line built up. A-Maz-Ing! By the time the hour was up, all the copies of my books had been sold and signed. The Albert Whitman Marketing person was ecstatic. She went around saying, "You sold out. There are no copies left. You sold out!"

About an hour later I was walking down a nearby aisle in the Exhibits area when I heard someone shout out from one of the publisher's booths -- "There's Wendie Old! She sold out!" It was my Albert Whitman Marketing person. She had gone to talk to other Marketing people and couldn't resist giving me a shout-out.

That evening a huge group of librarians attended the Newbery/ Caldecott/ Wilder banquet -- which was amazing, as usual. Neil Gaiman gives a great speech. As did Ashley Bryan, who won the Wilder award for his body of work.
-wendieO
Posted by Wendie O at 3:33 PM