If you need to get away, taking a writer's retreat is a nice way to get your writer's juices flowing. 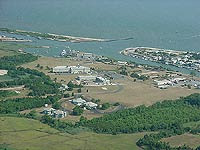 This past weekend I attended one on the Eastern Shore of Delaware. Like the view? Well, remember, I saw none of this because it rained all Saturday.

I had intended to work on my Lance (the dog) stories. And maybe fiddle with one or two other things. However, you may have noticed that my Vermont College Advisor, Julie Larios, challenged me to turn a November Blog into a picture book. So that became the first order of the day.

My first attempt, not so good. I simply re-wrote the blog from the viewpoint of a child. hmmmmm.

My second attempt was better. But I realized that I would need the names of many more pies than just pumpkin pie -- delicious as pumpkin pie is. So I ran out of the "quiet" writer's room into the noisy one. Help! Help!

I wrote my plea for pie-help on the whiteboard. (In an attempt not to disturb those intent on their computers) But when I turned around, about seven writers had left their own writing and had crowded around the board. (Any excuse for a break from writing, right?) This pie. That pie. It wasn't but a few minutes until I had enough pies -- many of which I had not thought of before. Yea! I LOVE when the group mind goes to work.

I presented the resulting picture book during the evening reading session.

I'm definitely going to go to next year's writing retreat, even tho it's scheduled to be in West Virginia, which will probably be an even longer drive away.
-wendieO
Posted by Wendie O at 1:12 PM

We have a few college students online from College of Norwich University and we love your blog postings, so well add your rss or news feed for them, Thanks and please post us and leave a comment back and well link to you. Thanks Jen , Blog Manager Southern Vermont College.