Being a Medicine Cat is a Dangerous Job

I've discovered that being the Medicine Cat for a tribe of Warrior Cats is a dangerous job. The 10-year-old has completed reading the third book of the series, and yet another Medicine Cat has been killed.

Now, normally characters in a book don't worry me. But she's so wrapped up in this story that she named everyone in the family for one of the cats in the book. So far my husband's cat is still alive. But me? I die in every book.

She finally took pity on me and let me choose my own name. Being a grandma, I chose to be a Queen cat called Goldenflower. (for you non-cat owners, a Queen is a female cat with kittens.) Nice name. I just hope that I haven't jinxed this poor queen. Does she survive in the fifth book, or will SHE die, too?

What's the series that has my granddaughter enthralled?
Warriors, by Erin Hunter. (which turns out to be a pen name for four writers.) 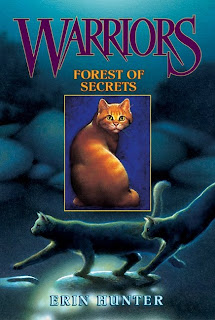 Wendie,
Last year this series was a household staple. I'll have to ask our Jr. reader if your chosen character makes it or not. He is currently reading Emily Rodda's Deltora Quest.
--SueBE