Halloween Party at the Library 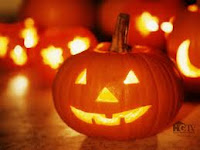 Tuesday, we held our annual Halloween party at the Joppa Library from 6:00 to 7:30 pm. By five minutes of six, there were already costumed people in the library gathered around the craft tables and massing at the door to the meeting room.

Exactly at 6:00 pm I placed the final supplies on the three craft tables in the Children's room and let the familes dig in. Another librarian sat at a fourth table helping children decorate paper bags.

The meeting room doors opened showing various snack food, a few more crafts, plus a large pumpkin shape and a pile of beanbags. The object of this game was to try to toss your beanbag through the eyes or mouth.

Each child checking in with me got a jack-o-lantern hand stamp.
We had planned to have the costume parade about 7:00, but since everyone had pretty much hit every activity earlier, we formed the parade about 6:45. It wound its way around the adult department, stopping for "Trick or Treat" at the Information Desk, then approached me at the Children's Information Desk.

(I also discovered that this was a good way to get an accurate count of the number of children attending -- I knew how many bags were in the pretzel jar and could subtract what was left.)

Including moms and dads, big sisters and brothers, and babies, we had way over 100 people milling around the library Tuesday. (and they all fit!)
Probably a record attendance for any program here.
Fun
Fun
-wendieO
Posted by Wendie O at 2:19 PM