The Wimpy Kid comes to the library 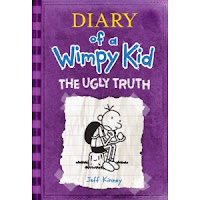 The fifth book, Diary of a Wimpy Kid, The Ugly Truth (a purple book) by Jeff Kinney comes out in November -- November 9th to be exact. Reserve your copy at a local bookstore or at the library, today.

To celebrate this, a lot of libraries are having Wimpy Kid parties. (just Google Wimpy Kid party and you'll see them)
In our library system, four or five branches are holding them.
My branch held theirs this Saturday.

Although both boys and girls love to read these books, mostly boys showed up for this program. One Girl. (I was able to convince a parent not to bring her Kindergartener by pointing out that one of the requirements for the programs was that you had to have READ the books -- we were going to have a discussion of them.)

And that is what we did.
Everyone filled out an application for the New York City Macy's Parade sweepstakes, then we settled down to talk about each book -- including the Wimpy Kid Movie book.
For some reason, nobody noticed the cheese on the floor in front of the TV set.
hmmmm.
We did some fun quizzes, including a Personality Test. (Each child read a quote and everyone else had to figure out who in the book said it. They were good and got most of them.)

Using the sweepstakes forms, I drew for prizes. The publisher had sent me Wimpy Kid buttons, bookmarks, and window clings. Yes, everyone got prizes.

Finally, I began showing the DVD of Jon Scieszka interviewing Jeff Kinney.
Mayhem erupted! They discovered the cheese. Suddenly everyone was running around, trying to pass the cheese touch to someone else. "Quick! Cross your fingers. It's the only defense."

They settled down when I gave everyone a piece of cheese. (from a posta-note pack made to look like swiss cheese.)
Although they could eat snacks, create a Wimpy Kid Haunted House on paper, or learn how to draw Greg while the DVD was running, most everyone focused on the 20 minute interview. By this time their parents had also wandered into the room and were enjoying the snacks and the DVD.

Labels: Diary of a Wimpy Kid. It's a Journal not a diary, Jeff Kinney interview, Wimpy Kid party