Wear a Kilt to Class? 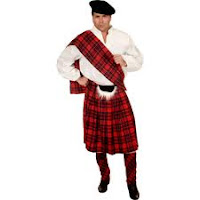 There I was, eating lunch in a college cafeteria, when I noticed that most of the guys there were wearing Kilts.

Why was I there? I was attending a one-day conference and, although the Student Center was about a quarter mile away, I decided the walk and a powerhouse sandwich would be better for me than eating at the nearby Mickey-D's.

Why were the guys wearing kilts?
Some were actual pre-sewn kilts.
Some were folded and gathered and belted old-fashioned kilts. Probably from material in mom's sewing closet.
And some had different plaids for the kilt and the shoulder scarf. (whatever that part is called)

One girl asked why they were doing it.
A boy replied, "It's National Wear a Kilt to Class Day." (I might not have heard it correctly.)

Really?
National Wear a Kilt to Class Day?
I Googled it and found nothing about it.
Hmmmm. Just a college joke?
I wonder.

"Talk Like a Pirate Day" didn't exist until somebody declared it and somebody else decided it was fun.

In five years "Wear a Kilt to Class Day" could sweep the nation; especially in small conservative high schools where students get kicked out for cross-dressing if they wear a kilt.