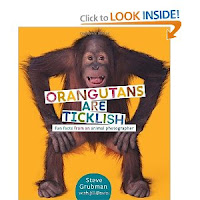 Don't plan to use this book for assignments. But it might serve as a kick-off to get children interested in wild animals.

Steve Grubman, a wild animal photographer, presents photographs he took of various animals, along with a few interesting facts about the animals, plus side comments about the photo shoot. "This chimp and I took turns making funny faces at each other. Monkey see, monkey do!"

First and second graders will enjoy the animal facts -- set in larger type than expected. Adults will be interested in his two page preface describing how he posed the animals. With advice about always having an escape route if things get out of hand. (like when the tiger attacked him)

Want more facts? A few more about each animal are inserted on the last pages.

I probably would have written the section about the Aardvark a bit differently than Jill Davis did, not using the word "nocturnal." Nowhere does she explain what that means. On the other hand, I never knew that Aardvarks are only active at night (nocturnal) until I read it here. (I wonder how that information affects our view of Marc Brown's Arthur books? He's supposed to be an Aardvark.)

This is more equivalent to an adult Coffe Table book than an informational book about animals.

But it's about what you should expect from a man who photographed the ad for a Samsonite luggage campaign. He was asked to produce a photograph of an elephant standing on a piece of luggage, so Steve found an African elephant, got it into his studio, and took its picture. (I remember that one! Don't you?)

More Nonfiction Monday links can be found at Mother Reader's blog, today.
Posted by Wendie O at 10:15 AM