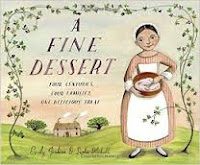 Does this qualify as nonfiction?
Sort of.

Yes, the families cooking in their kitchen are fiction.
However, the recipe is real. And every aspect of the kitchen, their actions, and the tools they use to make Blackberry Fool are carefully researched and can be used by anyone studying one of the four centuries depicted.

Where do they get the berries?
Four centuries ago they picked them themselves. In present day - bought. 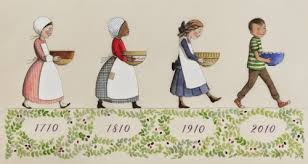 How do they make it?
Whip it with a tool make of twigs/
whip it with a handmade wire whisk/
whip it with rotary beaters/
whip it with electric mixer. (found the recipe on the internet!!!)
Ah - things have gotten easier these days, but it's still the same delicious blackberry fool. 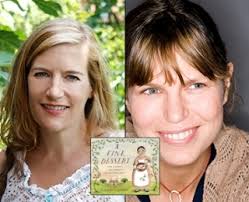 Interesting info Not included -- did you know that Emily Jenkins is also known as E. Lockhart when she is writing Young Adult novels? Click on over and read about her.