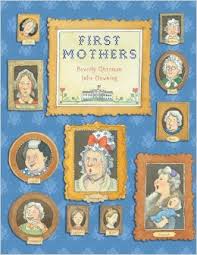 You study the presidents in school. Well, mainly the ones involved with important actions in history. There are books about the wives of presidents. (and that is one very difficult job, with the whole country watching what you do and listening to what you say.)  But do you know anything about their mothers?

Gherman and Downing spent over six years searching out information about these little known ladies and how to represent them in art. The result is a quick tour through our nation's history, as seen through their eyes.  Just to keep the connection between the mother and the president, Gherman has numbered each lady. However, you have to read the blurb about her to discover the name of her president son.


Each entry carries a title describing their character:
The Resourceful Mother
The Quiet Mother
The Pioneer Mother
The Flamboyant Mother
The Stepmother
The Optimistic Mother
The Midwife Mother
The Writer Mother.  (There were actually several mothers who wrote, but each is described in a different way.)
etc.

Some mothers were given a double page spread. Many others only got one page. And there also is a section crammed with two mothers on a page.

Attentive readers will notice that Mary Ball Washington (guess whose mother she is) keeps popping up making comments about other mother's lives. Mary AND Sarah Roosevelt comment about Bill Clinton's mother and also Barak Obama's mother.

(p.s. there is a major error in the Clinton entry. The illustrator has a notation that Bill Clinton was Impeached.  Not true.  Impeached means removed from office.  He actually was threatened with Impeachment, but the bill to Impeach failed to pass Congress.  (Interestingly enough, other presidents were also threatened with Impeachment by their Congress as well, but that's not mentioned in this book.)

Although the author mentions other mothers who were mothers AND grandmothers of presidents, she does NOT mention that Dorothy Walker Bush also was the mother and grandmother of two presidents. I wonder why that was left out?

Excellent bibliography and author's note.
Useful for Mother's Day and President's Day displays.
Posted by WendieO at 9:24 AM