The Impossibly True Story of Tricky Vic, the Man Who Sold the Eiffel Tower by Greg Pizzoli.  New York:  Viking, 2015. 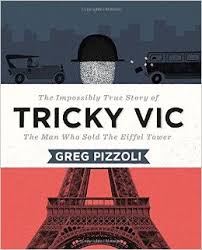 Tricky Vick was a Con Man.  Any child who doesn't know what a 'con man' does, will quickly learn the ins and outs of several common scams such as a box that magically produces money.
He is best known for one of the largest scams in the world. Not that it involved many people. but it involved the largest (at that time) structure in the world - the Eiffel Tower.

Pizzoli also illustrated the book, which enabled him to inserted a secret joke that only people who knew French would be able to figure out. Although four of the prospective purchasers of the tower are shown as silhouettes, the fifth man, Andre Poisson is shown in a business suit with a fish head. Fish head?  (Poisson is French for fish.)
Poisson bought the rights to dismantle the tower and sell it as scrap metal - making a huge profit. Or so he thought. But when he attempted to begin dismantling the tower, he learned that all he had bought was a few pieces of official-looking, but fake papers.
Naturally, Tricky Vick was not to be found.

Glossary, a long bibliography, an author's note, Acknowledgements, and a note about the art in this book complete the back matter.