At the end of February, our San Diego SCBWI held their bi-annual writer's retreat at the Mission San Luis Rey.  What a great, productive weekend we had. 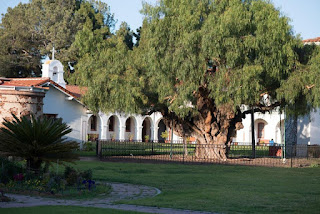 One of my goals was to finish the revision of the picture book I'm writing with a friend. (we write under the pen name C.W. Bowie)
I sat on the grass near the giant, old Pepper tree (planted in 1830) with my trusty laptop.
I did complete it and emailed it off to her, thinking I now had time to work on another project. She emailed her response back to me with more suggestions for revision by dinnertime (her bedtime back east).
Darn.
I looked it over on Sunday, made some final notes, we went back and forth another time or two AND we decided it's ready to send out.
!!!!!
p.s. - yes I did get to work on that other writing project, too. 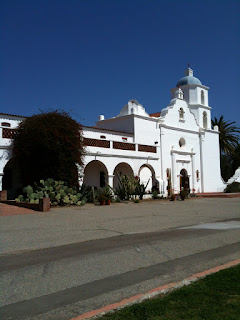 There’s nothing like the peace of the San Luis Rey Mission — the gardens, the ringing of the bells, and hours of uninterrupted time to create.
Almost 50 chapter members spent the last weekend in February at the Mission for a three-day retreat. The event began with a wine and dessert mingle, complete with a get-to-know-each-other bingo game ending in signed books as prizes. After the festivities, critiques were handed out and participants either relaxed, continued to socialize, got to work on revisions or called it an early night.
The next day began with a huge breakfast (all the meals were wonderfully prepared) before heading off to workshops, critique groups or work. Three formal critique groups were held at various times over the weekend and 11 well-attended workshops covered everything from picture book revision and teacher guides, to web press kits and nonfiction writing.
(Note - one of these workshop/ lectures was given by me. The final one on Sunday -- Persistence: Dealing with Submission and Rejection.
By Sunday at 5 p.m., many members had made significant progress in their designated projects as well as making or deepening friendships, enjoying great food (including snacks a plenty) and being inspired by the beautiful grounds.

In the end, it was hard to leave and return to the “real” world, but our time away was invaluable!
Posted by WendieO at 7:00 AM