What do I mean - "about things?"
I mean -- Monica Kulling writes picture book biographies about inventions that have made our life easier or more interesting.  All of these books are part of the Great Idea Series, originally published in Canada by Tundra Books and distributed in the United States by Random House.

For Example:
Going Up! Elisha Otis's Trip to the Top
I don't know about you, but when I was growing up, almost every elevator I stepped into had the name Otis somewhere on it.
"This is an Otis elevator," my mother would say. "An Otis elevator is a safe elevator."
So, of course I had to read this picture book biography.  And among other inventions, the safe elevator is his major claim to fame.  Because -- he created a safety brake that will stop an elevator from plummeting to the ground if something went wrong with the cables that pulled it up and down.

Kulling begins each biography with a poem describing how people use the invention explored in the book.  She also makes the inventor come to life. Readers can see how life was lived at that time and how particular inventions improved people's lives.

Other books in her Great Idea Series include: 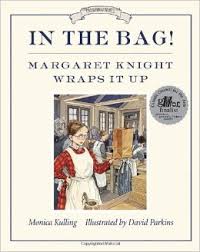 In the Bag! Margaret Knight Wraps it Up.
Among Knight's 90 inventions was a machine to make square bottom paper bags - yes, those bags you take home from the grocery store. Since this was in the late 1800s, the machinist who was hired to transform her wooden model into a metal machine that she could take to the Patent Office to claim her Patent got there first and registered it as his invention. Knight sued, claiming she was the inventor. He defended by claiming that women couldn't invent things. He lost. She won her case. 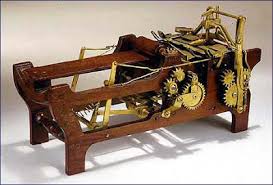 Spick-and-Span! Lillian Gilbreth's Wonder Kitchen
Anyone who loves the book Cheaper by the Dozen will love this short biography of the mother of that family and how she made kitchen design more efficient, easier to work in.