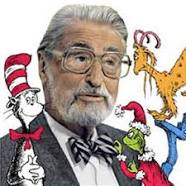 Theodor Seuss Geisel was born on March 2, 1904 in Springfield, MA.

A major change in the books offered to struggling beginning readers occurred in 1957 when William Spaulding, director of Houghton Mifflin’s education division challenged their trade publishing company's most popular picture book writer, Theodor Seuss Geisel – who wrote under the pen name Dr. Seuss – to write a book based on the list of 400 sight words a first grader should know. These words could not be sounded out with phonics, but had to be memorized by the new reader and included “the, and, play, run, I, and is, and the numbers one and two.

Spaulding demanded, “Write me a story […] that first graders can’t put down.”

Geisel took over six months to craft an exuberant, rhyming easy reader – Seussian style – entitled The Cat in the Hat using 237 of the suggested words. The result revolutionized the reading world.

Geisel followed this with The Cat in the Hat Comes Back and Random House’s Beginner Books series was born. (The education division's version of the book, with a dull, orange cover, stopped being published after a few years because schools, libraries, and bookstores preferred the more colorful trade version.)

HarperCollins's I Can Read line began in the same year with the publication of Else Holmelund Minarik’s Little Bear, illustrated by Maurice Sendak. These three books are still in print and those lines of easy readers are still going strong today.