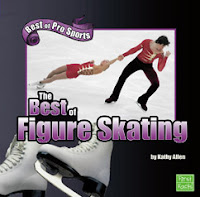 The Best of Figure Skating by Kathy Allen. Mankato, MN: Capstone Press, 2010. The Best of Pro Sports series from the First Facts imprint.

During the Olympics, what better book to check out than one giving you a quick background of some of the best moments in Figure Skating.
(I confess, figure skating is my very, very favorite.)

From 1968 when Peggy Flemming won the only Gold Medal for the United States to the fierce competition between Johnny Weir and Evan Lysacek from 2004 to 2008, this book tries to hit the highs of the sport. (The attack on Nancy Kerrigan might be considered one of the Lows, but the book focuses on her competing in the Olympics while injured and winning the silver.)

The book varies between a double-page spread about one skater (or a pair) with sections discussing two different skaters. It's hard to summarise a skater's career in 5 sentences, but that's what this book attempts to do. Nice photographs, too.

The readers this is aimed at won't know any of these skaters, but their parents will remember having seen their wonderful performances. Torvil and Dean -- who can forget their 1984 performance to the music of Bolero? I wonder if it can be found on U-Tube? Almost everything else is there. It changed the whole course of Ice Dancing from Ballroom Dancing to the variety of modern dance. (not that this book says that -- but I couldn't help mentioning it.)

More Nonfiction Monday posts can be found at The Art of Irreverence. Click and enjoy.
-wendieO
Posted by Wendie O at 8:23 PM

I love ice dancing, too. I just had to look. Sure enough, you can find Torval and Dean on youtube. Well worth the 5:35 minutes.