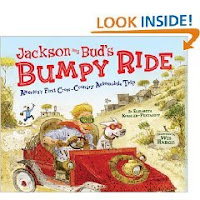 I spent the last part of the 20th Century researching the December 1903 First Flight of a heavier-than-air flying machine. Imagine my surprise when I discovered that 1903 was also the year of the first trans-continental automobile trip.

Automobiles had recently been invented, but were still the toys of the rich. Most people still walked, rode bicycles, horses, or horse and wagons (or carriages) to get from one place to another.

On May 19, 1903, Horatio Jackson, sitting in a gentleman's club in San Francisco, California, accepts a bet that someone/ that HE can drive a horseless carriage from California to New York in less than three months! He buys a used Winton auto, hires a mechanic, Sewall Crocker, to be his co-driver and off they go on May 23. (His wife travels home by train, expecting to meet him in New York.)

The adventure is written in present tense and skips a lot of the hardships of their journey through the northern tier of states with no roads, no gas stations, and no easy way to get supplies when parts of the car get broken. (flat tires, etc.) In Oregon (I think) they pick up a bulldog named Bud, who travels the rest of the way with them, complete with his own goggles. (You can see those dog goggles on display at the Smithsonian Institution in Washington, D.C.)

(added later -- If you go to Elizabeth Koehler-Pentacoff's website, she has a link to a website for Ken Burn's film about this trip and there you will find information about the dog and a map of their trip which shows where dog was picked up in IDAHO.)

At one point the text says "Next day," (June 6) -- but on the previous page it was still mid-May. Skipping along (eliminating the boring parts?), one page has four quick paragraphs about June 23 -- and the facing page of the double page spread talks about July 7. Turn the page and it's July 12 where they drive through a huge swarm of grasshoppers.

This tiny taste of Jackson's adventurous trip leaves you wanting to know more. Luckily others (mentioned in the back of the book) have written longer, more detailed versions. There even was a Ken Burns PBS Special shown in 2003 about this cross-country trip -- not actually a race, since they knew of no one racing against them. However, it turned out that two other driving teams also attempted this feat that summer -- but Jackson, his co-driver Cocker, and Bud arrived first.

Personally, I hope to read Jackson and Bud's Bumpy Ride to my grandchildren, and if I am so blessed, it makes me smile thinking that they in turn will read it to theirs!

I should look for it, too, for my grandson. He would very much enjoy it!

Wendie, do you remember me? I'm Karen Rhodes, from the old Fido Writing Echo. Glad I wandered into your blog!

Wow - Hi, Karen. Isn't the internet amazing these days? Quite different from the old FIDOnet bulletin board. Welcome to my blog. I tend to ramble all over the place -- from writing to family adventures to library stuff to book reviews. (easy reading nonfiction, mostly)