At present there is a strange law says that bloggers who review books (not print reviewers, just bloggers) must acknowledge when they get books for free, and must also reveal any other connections they have with the publisher, writer, etc.

So, here's my confession.
I discovered several boxes of books from Capstone Publishers on my back porch one day. Were they individual books I had requested to see for reviewing? Nope. They were various easy-reading series the publisher thought I might like to examine for potential reviewing. Some are pre-pub and some are just published, which means that my library system doesn't have them on our shelves, yet.

Libraries are closed today and I realized that I needed a nonfiction book to review for Nonfiction Monday, so I emptied the boxes and piled the books into various piles.

Suddenly I realized that I had a handful of books by writers I know. I know that they do quality work and have high standards for research. I realized that I didn't have to wait for reviews of these books, I trust these writers.

So, here goes.
First up -- Laura Purdie Salas. I've known Laura for 15 years or more, ever since I wrote articles about the Moody Blues rock band for her husband's fan magazine -- Higher & Higher. She has written lebenty-hundred books, both poetry and prose. 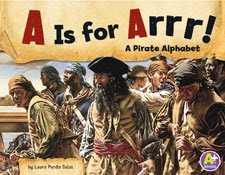 A Is for Arrr! A Pirate Alphabet by Laura Purdie Salas.
Mankato, MN: Capstone Press, 2010.

Other books in this series include:
P is for Pom Pom! A cheerleading Alphabet,
Y Is for Yowl! A scary Alphabet,
Z Is for Zoom! A Race Car Alphabet.

Even though the whole series has a copyright date of 2010, I do hope Capstone manages to get Y is for Yowl! into stores in time for Halloween. If not this year, then the next?

Alphabet books may look easy, but they're actually quite difficult. Don't even think of doing an alphabet book until you are sure it passes the 'Q' and the 'X' test. (the hardest letters to find representative words for)
How did Laura do?
Pirates have Quartermasters (yup) an a big fat X marks the spot. (So far so good.) The scary alphabet includes Q is for Quicksand, but falls down a little with X is for eXplode. It's considered cheating, but acceptable if the x is in the first syllable of the word -- and the beginning sound is X.

The illustrations are mostly full page photographs. Many of them are close-ups of the alphabetical object being used, with plain backgrounds that make the object POP. The words don't intrude and don't overlap the photograph. (which would make it difficult to read) Instead they have their own, set-aside, area of the page. In the pirate book the background for the words looks like old parchment. Like an old map. The scary book has white lettering on a black tombstone shape. All aimed to assist the new reader to decipher the words. And the words? First and second grade level. Each letter and photograph are matched with two or three sentences describing them.
(I love the sleeping pirate at the end. zzzzzzzzzzzzzzzz
Definitely a photo of a re-enactor caught in the act of taking a nap. Other illustrations in the same book are paintings or even look like scenes from a pirate movie.

Includes: Fun Facts
Index and Glossary
Read More -- book and Internet sites
And a note to parents and librarians.
Some books of this series include a craft.

The note says that these are designed to be read aloud to a pre-reader or read independently by an early reader.
More Nonfiction Monday sites are located here.
-wendieOld
Posted by Wendie O at 10:11 PM

Labels: A is for Arrr, Capstone Press, Laura Purdie Salis, Y Is for Yowl A scary Alphabet

Hey, thanks for write-up, Wendie! I wanted x-rays for the x word in Scary ABCs. My original outline for the book had stuff in it that was scary to many kids although not traditional scary like "Boo!" scary:>)

But they wanted to go more in a traditional Halloween scary mode. Which was fine and fun to do, too. I admit I don't care for most of the X words in the ABC books I've done so far, though.Trying to keep the readability somewhere near target knocks out most true X words. Darn it.

So glad you found the series mostly appealing! Thanks!