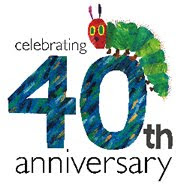 Since today was -- Read The Very Hungry Caterpillar story to as many kids as you can DAY -- several of our public library branches did readings every half hour, using books, flannel board presentations, the pop-up version, etc. Unfortunately, I was only in my branch a few hours today, so I set up a Very Hungry Caterpillar craft, instead.

(added later)
The librarian coordinating the Read for the Record in our county library system received this letter:
Dear (librarian's name)
Thank you for reading as part of Jumpstart’s Read for the Record, presented in partnership with the Pearson Foundation! I’m so happy that you shared Eric Carle’s classic, The Very Hungry Caterpillar, with a child in your life on October 8!

Together we read to more than ONE MILLION children, breaking the world record once again - but numbers are still coming in!
We will have the final number later this month.
.... (text eliminated)
Thank you again for reading with us and helping us raise awareness for America’s early literacy crisis! This has been an important Campaign for Jumpstart and for children everywhere. I'm thrilled that you were a part of it.
Sincerely,
James Cleveland
Posted by Wendie O at 9:38 PM

Labels: Eric Carle, Read for the Record, strange happenings in the library, the Very Hungry Caterpillar