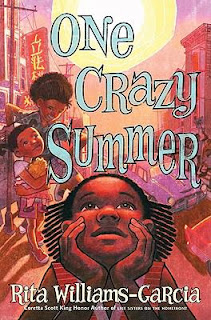 Well, I arrived safely at Vermont College on Sunday, in a snowstorm.

ALA announcements of award winners was Monday morning -- lots of Vermont College graduates won or were cited as honor books.

AND --
Rita Williams-Garcia's wonderful book, One Crazy Summer, won the Scot O'Dell award, the Corretta Scott King award, and was cited as a Newbery Honor book. (It was also a National Book Award nominee. WOW)
She's a faculty member here and I was sitting three people away from her when the announcements were made. The Coretta Scott King award came as a total surprise to her. She did know about the Newbery Honor, but of course, couldn't let us know until it was announced. She and her editor have already planned all the New Orleans restaurants they'll be going to -- to EAT.

My friend, Jenni Holm, (author of Babymouse) was one of the other Newbery Honor Winners.
Nobody had ever heard of the book that actually won -- Moon over Manifest / Clare Vanderpool.. I'll have to read it.
if you've read it, feel free to tell us about it.
-wendieO
Posted by Wendie O at 9:23 PM

Wow! What a great way to experience the awards. Looking forward to reading One Crazy Summer.

I liked this one best until I read Heart of a Samurai, which my students will really like!