To write or not to write, that is the question...

Sometimes you simply decide not to write a book because there's a much better one already on the shelves.

During the fall, I did more research on the subject, including putting reserves on every picture book bio of him I could find in our library system. 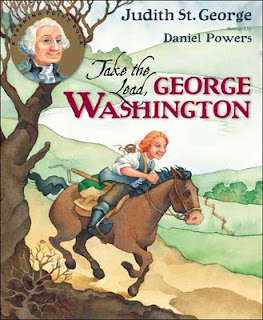 But when I read Take the Lead, George Washington by Judith St. George, illustrated by Daniel Powers (NY: Philomel Books, 2005), I realized that there was no way I could do any better. This book is just about perfect.

It's written in an open, chatty style sure to appeal to child readers. Plus, I could detect no errors. (Every time I thought "But you didn't tell about..." the very next page described the person or event I had thought was going to be missing.)

Just a note: since I've already written a 128 page bio of George for Enslow that won a few awards, I've already done a lot of research into his life. Therefore, I was looking for very specific beats in his life. But even I was holding my breath as Judith St. George described his adventures in the wilderness. What exciting writing.

And -- she ended this book when George was sixteen, looking ahead to more adventure. Good spot to end it. This means she didn't have to get into the wrong decisions he made during the French and Indian war and the irresponsible way he treated his mother while he was at war.

Be sure to check out the other Nonfiction Monday posts at Tales from the Rushmore Kid.
Posted by Wendie O at 9:56 AM

Labels: Judith St.George, Nonficion Monday, Take the Lead George Washington, why should I try writing a book when she did it so much better than I could