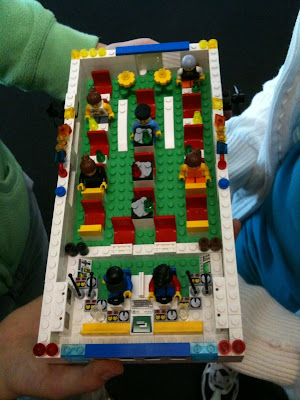 Can you guess what this picture is?

The College Park Aviation Museum, located just outside of Washington, DC, had a "make a legos airplane" program at their site on Saturday. Since the 10-year-old and her best friend, an almost-10-year-old, love creating things with legos -- I took them both down there after the 10-year-old had finished her gymnastics lesson.

College Park Airfield (next to the Museum) was the first airfield in the United States. The Wright Brothers flew there and sold planes to the army --which flew out of there. These days it's a small grass airport for small planes, like piper airplanes. I visited the museum several times while I was writing the Wright brothers books a decade ago.

It wasn't a contest -- it was a mob of kids grabbing for lego pieces. Then the kids took turns having their 'official' picture taken with their newly created planes. The pictures will be on display at the museum. Most of the lego airplanes were then taken apart and the pieces put back on the tables for others to use. A select few were kept for a special display this month, and maybe next. Our girls' airplane cabin was among those chosen.

I sat there knitting and talking to kids who came over to show me what they had made. (one girl wanted me to show her how to knit. I explained that there wasn't time to do that today.)

After the event closed, we roamed through the history of aviation display of old planes -- even a Wright B military plane. The girls had fun dressing up as aviatrixes (complete with Amelia Earhart leather cap), experimenting with engines and aerodynamics, and even 'flying' a small plane. We passed modern small planes on the airfield to and from the museum.

They even managed to purchase science experiments from the gift store one minute before the building closed. (We were the last people out.) A fun time was had by all. -wendieO
Posted by Wendie O at 7:09 PM