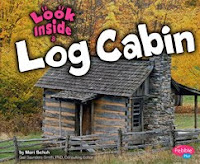 Now, I know that Capstone is a small press located in a northern state in the middle of the United States, but do they have to be so focused on Minnesota that they don't realize there are log cabins in other states? Why do I ask? Well -- the book starts right out declaring that Swedish pioneers built the first log cabins in America.

Oh, really? Minnesota does have a large settlement of people from Sweden, but not a lot of Swedes were among the early settlers in the Mid-Atlantic States, so how come there are so many old log cabins still standing here in the east? Some even have people living happily in them. Others are preserved in parks and museums. I live here and have seen many, myself. (I almost bought one, as a matter of fact.) Many of the eastern log cabins were built by German, Dutch, and English settlers before the War of Independence. There are log cabins up and down the east coast. Go visit Jamestown, or a reconstruction of the Pilgrim settlement in Massachusetts, or Valley Forge to see examples.

Same technique, though.
You find your tree and chop it down.
Trim the bark off, square the sides if you want, and notch the ends.
Here is where the book needs one more picture -- of men interlocking these notches together to build a strong wall. (I say 'mem' because those logs are darn heavy.) Modern kids probably have never built things with Lincoln Logs (TM of a toy), and probably have no idea how the house walls on the next page were put together. The Glossary in the back explains this a bit more, but it needs a picture.

This series is aimed at first graders with two sentences on the left and a photograph filling the page on the right out to the edges of the page.

By now you should realize that I'm still digging through the box of sample books that Capstone Press sent me last fall. This particular one caught my eye because I've always been interested in early houses and have included pictures of them in my biographies of the first presidents. Plus, I learned how to build (and caulk) a log house at an early age.

No, we didn't buy the log cabin I mentioned above -- we bought a pre-Revolutionary War stone farmhouse, instead. Which also has a fireplace in every room. Now heated by a woodstove.

Click on over to Whispers of Dawn to read the other fantabulous nonfiction books being discussed today on blogs.
-wendieO
Posted by Wendie O at 10:28 PM